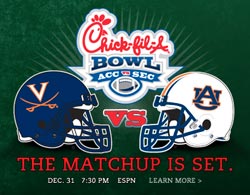 A panel on sports sponsorship and marketing at the IMG Intercollegiate Athletics Forum in New York on Wednesday was all about passion and strategy and relationships, as marketers discussed the college-sponsorship landscape.

Steve Robinson, SVP and CMO at Chik-fil-A, said that for the Atlanta-based company, college football is the marketing platform, and that the QSR chain plans to increase its investment there. The company, which has the title sponsorship of the Chick-fil-A Bowl in Atlanta, says that when it comes down to deciding on which schools to be involved with, the quality of the school's leadership matters. "It's about who is on the board -- who is creating a sense of accountability."

Chik-fil-A aspires to be a national brand, per Robinson. "We are just trying to create a platform for the cows [the company's mascots] to sell chicken, and for us the college student is the sweet spot. The cows have played very well with that audience. We have local-restaurant independent operators, and we do well in college towns because these local operators work with athletic departments, colleges, and the administrations."

Sports, fashion and media behemoth IMG brokered national collegiate deals for both UPS and MillerCoors under its intercollegiate marketing platform. The Winston-Salem, N.C.-based division -- IMG College -- ramped up within the past year, expanding its client base (including another big deal with Hyundai), and bringing in a cadre of communications and marketing people from NASCAR.

Lawton Logan is SVP of U.S. business development for the firm. He said there are a lot of opportunities for marketers there compared to the professional sports arena. "It is still largely almost greenfield,” he said. “The disproportionate return on investment is significant. College has a long way to go to reach the pros in terms of [brand] investment levels." IMG represents over 200 college properties, but has exclusive intellectual property and marketing delivery deals with 70 or so schools.

Robinson said Chik-fil-A is not a "write-a-check" marketer just looking for logo-plastering opportunities. "For us, investing in games is paying for the right to activate. For us, it's shoe leather," he says. "We are highly engaged; we want to touch the fan. We want them to experience our food and people. College football gives us the platform to that." He says the company activates on 20 to 25 campuses every year, doing things like showing up at tailgate parties at stadium parking lots and giving away 5,000 or so Chick-fil-A sandwiches.

"You don't have to be an international brand to enter this space," said Robinson, adding that the company -- which started 15 years ago with the Chik-fil-A Bowl -- now has over 200 stores that are licensed outlets on college campus.

MillerCoors has a fine line to walk, given its category. Jackie Woodward, VP marketing at the company, says alumni are the focus of the brewer's collegiate efforts. "When you look at the numbers of passionate alumni, that's our value proposition," she said.

Woodward characterized the choice between broad, national sponsorship and intellectual property deals and local marketing at specific schools as an "either-and" choice. "All of us have national brands, so it's very helpful for us to do one-stop shopping with IMG across a broad number of schools At the same time, we are going about this on an individual school-by-school basis to develop individual relationships, and to make sure we are marketing appropriately based on the philosophy of that school. At the same time, a national [college sports] TV platform investment makes all the sense in the world."

And universities, which might have been much more wary about dealing with a malt beverage in the past, are more open to it now because the decision makers are more savvy about tailored marketing, according to Logan. "Most universities know what MillerCoors is doing -- that they want connectivity with alumni and passion points in the community. We sell intellectual property, and universities that would have not wanted this in the past are more receptive now."

MillerCoors pairs its marketing efforts with a responsibility grants program called "Great Plays" at each of the schools with which it has a sponsorship arrangement. "We have tried to figure out what the right message is, and we have also taken a stand on activities we could do but won't, such as fan camps. So we are trying to work individually with institutions, and nationally with IMG," said Woodward.

Logan said that if university athletic-sponsorship deals are easier to ink now, it is partly because there are more business-minded athletic directors at universities, who come from professional sports backgrounds or commerce. "They have been very responsive," he said.

Chick-fil-A’s Robinson said that for his company, the deals depend on "who will work with us -- who will help us activate that fan base" -- more than getting category-exclusive deals "because we really have no direct competitor. "If we get preferential treatment that's fine for us, but as long as we aren't back-to-back [with another QSR] we are willing to be there."

Ron Rogowski, VP of global sponsorships and events at UPS, said that since the company is largely a B-to-B player, the focus is college alumni, in addition the university and its business units. "That has tremendous opportunity for us as well. Universities have to ship books, student visas -- all of the things that make universities work is an opportunity for us. And it becomes an efficient buy where we can do things locally. It's a platform for us to tell a story about logistics."