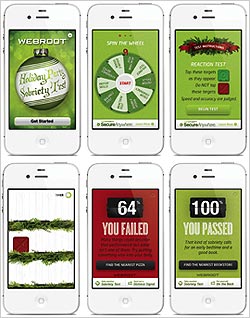 ’Tis the season of parties and merriment, which can lead to overconsumption. But don’t worry -- Internet security firm Webroot is ready to help before a partygoer does anything dangerous, like use their mobile phone.

Continuing a tongue-in-cheek mission to assist consumers who may have impaired judgment after consuming alcohol, Webroot has created a “sobriety test” app for people’s mobile phones. “What would the holidays be if we weren’t reminding people to be careful?” says Chris Benham, chief demand officer for Webroot. “We just want to discourage people from doing things that might not be good for them.”

Like a Facebook app the company developed last year, Webroot’s mobile sobriety test walks people through one of five random activities that test one’s “sobriety” (such as holding a smartphone level and still, rolling an onscreen ball, aligning images, or having a shootout). After three such tests, the app determines a level of impairment and uses Google technology to suggest options such as a local pizza place, a pharmacy (presumably for hangover medications) or taxi company. (For those who score too well on the test, alternate activities such as a movie or a bookstore are offered as well.)

“We assume if you’re taking the test, you’ve already had a few,” Benham says. “We hope people will focus on the fun of the app.”

Unlike the Facebook application, which locked a user out of their computer’s social networks if they failed the “sobriety tests,” the mobile app (available for Google Android phones and soon for Apple’s iOS) doesn’t lock down a person’s phone if a user fails to pass the tests. Like the Facebook app, however, it will post the results to a user’s social network, if they so desire.

Benham was quick to note, however, that Webroot’s app is not a true sobriety test, and will not truly determine a person’s level of alcohol impairment. But the connection to the brand’s dedication to protect consumers from threats -- whether they be outsiders or themselves -- is still in place, Benham says.

“It’s the time of year [consumers] should be thinking about security while they’re transacting online,” he says. “We want to protect you from the bad guys, but sometimes you need to be protected from yourself.”