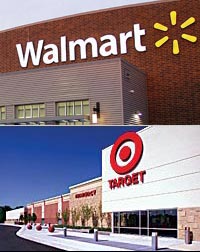 Looks like there’s a little more juice in those jingle bells this season, with the National Retail Federation upgrading its holiday forecast.  And as the final Christmas countdown begins, both Walmart and Target are stepping up their game.

The NRF, which called for a gain of about 2.8% in its initial forecast back in October, says it is now expecting final holiday sales figures to come in 3.8% higher than last year, at a record $469.1 billion. And while that is still substantially below the 5.2% gain realized last year, it’s better than the 10-year average of 2.6%. And earlier this week, comScore announced that online sales are also up, 15% from actual sales at this point last year.

“After strong sales reports in October and November, along with a successful Black Friday weekend, retailers are cautiously optimistic that this season will turn out better than initially expected,” the NRF says in its release. The Washington-based trade group says it is making the adjustment based on stronger-than-expected sales in November, as well as polling showing that the average American has completed far less of their holiday shopping than in previous years, “an indication that many shoppers bought for themselves in November and have plenty of holiday shopping left to do.”

Discounters clearly intend to make sure that they get their share of that spending, with both Walmart and Target announcing sweeping price cuts on in-demand items, including electronics and toys. Target, for instance, is lopping 40% off many items -- and in some cases, even more. For example, it has lowered the $199 Nikon L105 digital camera to $99, and the $43 Fisher-Price Imaginect Mega T-Rex to $21. In addition, shoppers who spend $75 or more in stores from 5 p.m. Dec. 16 until noon on Dec. 17 will receive a $10 Target GiftCard.

Walmart’s promotional tactics are similar, and also include an extra day to shop by extending its shipping deadlines on walmart.com. Called the “BIG Christmas Event,” it’s promising shoppers the lowest prices of the season, including a 32-inch Vizio HDTV at $298; 3D Blu-ray Player with Built-in WiFi at $98, and select video games at $39.96.