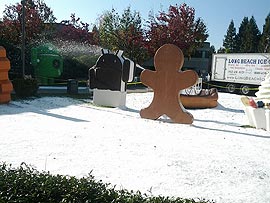 Google made more than 24 acquisitions this year. Yes -- do the math. That averages two acquisitions per month. The most recent buy, Clever Sense, offers up the tool Alfred, which provides personal recommendations for nearby restaurants. The acquisition makes sense when viewing a complete list of companies acquired during 2011.

Most of the buys that Google made were related to social and local for Google Wallet and Offers, and Google+. Three of Google's high-profile acquisitions -- AdMeld, Motorola Mobility, and Zagat -- will cost Google more than $13 billion.

Oh -- and voice, too. In January, Google acquired SayNow voice recognition technology for an undisclosed sum.

It's no secret that search must evolve. We have seen it in QR codes and barcodes. Typing a search query into a box is so, well, 1999.

Reports suggest that Google's voice service -- an alternative to Apple's Siri, code name Majel -- will enter the market in early 2012. Google's new technology, however, promises to interpret everyday language rather than voice commands.

Still, it appears that Google did not make enough acquisitions in 2011 to burn through its cash, and by the end of the year the company still had money to give away. While Google spent some to make snow at its Mountain View, Calif., campus, even more went to charitable causes.

If you had control of the $40 million purse strings, to what charity would the money go?