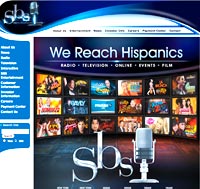 One of the largest digital radio ad networks is growing bigger, with TargetSpot’s announcement that it has signed a deal with Spanish Broadcasting System, extending its reach among the growing U.S. Hispanic audience.

SBS claims to have 1.3 million monthly unique listeners across its network of 21 Hispanic-oriented stations, reaching 42% of the total U.S. Hispanic population; SBS has a presence in most of the major Hispanic markets, with stations in New York, Miami, Los Angeles, San Francisco and Chicago.

TargetSpot enables digital advertisers to target listeners down to the ZIP code level, for a fair degree of specificity in reaching urban Hispanic audiences. Hispanics are heavy radio listeners, according to SBS, which cites data showing average radio listening time of 15.5 hours per week among Hispanics.

TargetSpot is not the only big online audio network bolstering its reach among Hispanics with Spanish-language offerings. Although it is not an online ad network, in September, Clear Channel Radio revealed that it was adding Spanish-language programming from Univision Radio to the New iHeartRadio platform. The content partnership -- the first third-party distribution relationship for the digital platform -- includes music, sports, and talk formats, as well as leading AM and FM Spanish-language radio personalities.