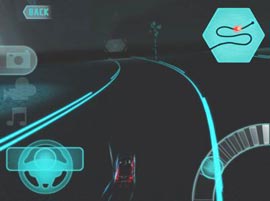 Ford is using some "app-titude" to create buzz around the forthcoming 2013 Ford Fusion, a new version of a car that, in some ways, was the initial salvo in Ford's efforts to cannonball back into the big crowded public pool of the U.S. car market. The automaker launched the Fusion in 2006, but it was the 2010 Fusion and Fusion hybrid models that grabbed headlines and won awards.

For the third-generation Fusion, Ford is throwing sparks by letting consumers do virtual test drives of the new car via a mobile app leading up to the car's unveiling at the early January North American International Auto Show in Detroit.

The app, developed with Moonbot Studios, allows people who download the app to "drive" the new Fusion in a kind of "Tron"- like virtual roadscape. The app includes videos about the design and features of the new version of the car. As part of the tease leading up to Ford's unveiling at the show, the app will show more and more of the exterior of the top-to-bottom redesign as the date approaches the press day.

As part of the experience with the new app, consumers who "drive" the Fusion through a series of neon-lit virtual worlds unlock more and more of the car.

Said Samantha Hoyt, Fusion marketing manager, in a release: “The app allows consumers to learn about the advanced technology and design of the car in a fun and easy-to-use way."

People with Android and iOS on their smartphones or tablets can use the app: that means iPhone, iPad and Droid. The company says players start by finding and "capturing" a Ford Blue Oval logo using the mobile device’s camera. The Ford logo will appear on the screen as a button that starts the program. The video-game style app then allows consumers to drive a "digitally camouflaged" Fusion on a track toward video clips, each of which spotlight technology and design elements, with Fusion team members talking about each.

The idea is that users get content rewards for "driving" every day, as a daily video clip on key car features unlocks a new enhancement to the app. There are three driving "worlds" in the app that players can unlock, leading up to the real-world reveal. The company says each world offers a slightly perspicuous look at the Fusion as well as the visual environments.

Needless to say, when Ford's new mid-sized car is unveiled at the 2012 Show at Detroit's Cobo Hall, users will have access to the full, clear image of the car: after viewing the final video in the driving experience, an image of the car will appear on the main menu. At that point users can drive any of the four Fusions on the track and can create a custom image of the car to share via Facebook and Twitter.

The new Fusion will also have a role at the yearly Consumer Electronics Show (CES), where Ford's CEO Alan Mulally has been a fixture for the past three years. At next year's show, according to the automaker, the Fusion will serve as “Official Car of the 2012 International CES” and be introduced at the show by Mulally and Consumer Electronics Association CEO Gary Shapiro. The CES this year is in early January.

Ford is also showing its EVOS Concept cloud-enabled vehicle at the show, where this year Mulally will be part of the 2012 Innovation Power Panel keynote at the Las Vegas Hilton.