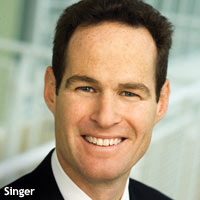 TV Everywhere deals for TV networks might be part of TV distribution deals in the future with cable, satellite and telco TV program package providers, says a Discovery Communications executive.

Brad Singer, senior executive vice president/CFO of Discovery Communications, commenting on a recent big TV media company/cable operator deal, says TV Everywhere components "appear to be going in an overall package." Speaking at the CitiCorp media conference, he cautions that each network and multichannel TV operator will have their own priorities.

"There is a lot of complexity," says Singer. "It may take longer than people expect. We haven't had any [major carriage] renewals, which is good impetus to do something."

When asked whether the slowness of measurement of video usage on digital platforms could curtail these deals, he said "that's one part of the valued equation." Singer said "they can measure in the home, but they can't do tablets [and other mobile digital devices] from my understanding," He added: "Ultimately, it will get measured."

Singer was asked about new digital/Internet multichannel retailers and whether Discovery would do a deal with them. He likened it to a year ago, when satellite and telco providers looked to compete with existing cable operators. He did say, regarding any future deals with new digital TV retailers: "We don't want to disadvantage our existing client base."