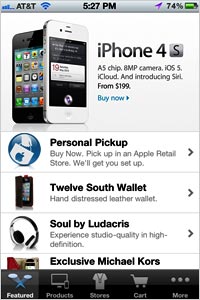 The role of mobile at retail was the story of the holiday season. Almost every e-tailer and brick-and-mortar store armed itself with better apps and mobile sites to capture all of those savvy smartphone-assisted shoppers. But who delivered the goods in the end? According to its first survey of consumer satisfaction with retailers’ mobile sites and apps, customer experience analytics provider ForeSee says it was Apple and Amazon in a walk.

On a 100-point scale, Apple’s mobile experience scored 85, Amazon 84 ahead of a cluttered field that included Dell (78), eBay (77), BestBuy (76) and Staples (76). In polling users during the holiday shopping season, the company was able to get statistically significant results about mobile usage on 16 of the top e-retailers.

The average Satisfaction Score among the top e-tailers was 76. Generally, these brands got higher scores from users for their Web site (an average of 79) than the mobile experience. Apple, whose mobile site score exceeded its Web score, is a notable exception. Perhaps most critical for these companies is the cross-channel benefit of a well-executed site. Consumers who were happy with the mobile presence were 54% more likely to consider that company for purchasing again and twice as likely to use the brand’s mobile channel again. In addition to Apple and Amazon, ForeSee found that the mobile executions for BestBuy, Avon, Staples, Barnes & Noble, Victoria’s Secret and Target all engendered loyalty to the brands and strengthened their relationship across channels.

The level of mobile shopping activity was high this holiday, and the use of mobile in-store is no longer trivial. More than a third of all online shoppers (34%) say they used mobile phones to access information, and 19% of all surveyed said they used the phone for comparing products and prices at the retailer’s physical location. Only 10%, however, say they used a retailer’s own app. But 15% of those who use mobile platforms as shopping tools say they did make a purchase over the device this holiday.

As many suspected before the holidays, the potential of mobile platforms to poach customers from one retailer to another appears to be a real prospect. Among those who used their mobile phones for shopping, 43% accessed a competitor’s site while in a store and 26% used shopping comparison engines. Only 14% accessed a competitor’ app in-store. In the end, the host retailer appears to have the upper hand, as 65% of mobile shoppers say they accessed the store’s own Web site while they were shopping there.

Price and product info are the leading concerns, with 47% of those who used mobile sites or apps for shopping saying they accessed this information on their handsets. More than a third (34%) were comparing products, 27% looked up specs, and 25% viewed reviews.

Consistency across channels that are already well-tuned to the consumer appears to be the not-so-secret sauce for mobile success, according to ForeSee’s Matthew Dull, Lead of the company’s usability team. In the full study Dull writes: “Apple and Amazon both provide mobile experiences that are heavily functional and transactional, while still enabling customers to easily do the same things they do on apple and amazon’s Web sites: browse and search for products, read reviews, look for related products and accessories, buy products, find stores, add to a wish list, and more… . In short, these organizations have earned their high customer satisfaction ratings by neatly balancing information and functionality in a small space, without venturing to the two extremes where many mobile sites or apps get trapped: total information overload or a version that is so streamlined and pared down that it’s useless.”