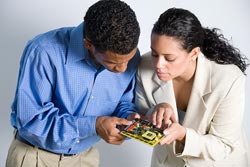 Consumer electronics companies (and marketers looking to drive app adoption in general) would be wise to go after a relatively small group of consumers who know their stuff and let the message radiate out from there.

According to International Data Corporation’s latest ConsumerScape 360 study, success begins with a market segment the company identifies as “Tech Evangelists.” Although the group isn’t the largest in the United States (that would be the “Pragmatic Purchasers,” who comprise about a third of the U.S. market), they do have an outsize influence over other segments.

“They influence the buying and usage of devices about 500% more than any other market segment,” Michael DeHart, director of the global ConsumerScape program at IDC, tells Marketing Daily. “They’re also far and wide much better at using technology than any other segment.”

According to IDC, the Tech Evangelists are about 22% of the worldwide market, and about 18% of the U.S. market. They tend to be extremely adept at using the advanced features of their devices, but are among the least impulsive buyers (meaning they’ve done their homework, DeHart says). They’re early adopters, but they don’t buy “flash in the pan” devices, and they’re much more engaged in social media than other segments.

And they have a huge amount of influence over other segments (which, in addition to Pragmatic Purchasers, include: Impulse Buyers, Experiential Adopters, Green Buyers and Disengaged Functionalists). According to IDC, 41% of Tech Evangelists agree with the statement that their friends and family turn to them for advice before purchasing electronics. Plus, a small group of them (11%) have sway over another 28% of the market when it comes to these devices, DeHart says.

“They really are the group that other people reach out to, but they’re the least likely to reach out to others,” he says. “It’s absolutely mission critical. It’s a waste of marketing and advertising dollars if you don’t reach this group.”

But they’re hard to reach, DeHart notes. They don’t respond to gimmicks, and are wary of a company’s advertising and marketing messages. The best way to reach them, he says, is to be upfront about technical specifications of new products, reaching out through social networks and the top industry blogs (like Engadget) with the most information. And to make sure your product is read to be handled by the most experienced users as soon as it hits the market.

“They read product reviews and tend to be the reviewers themselves,” he says. “The best way to reach them, honestly, is with a good product. And if you don’t have a good product they’re sure to tell the world about it.”