Should Tablet Magazines Really Be The Same? 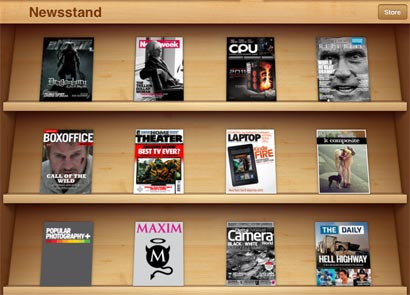 You never know what you are going to get when you open a digital edition of a major magazine on the iPad, Kindle Fire or Nook Tablet. Pieces of the Table of Contents may slip and slide in and out differently on People for iPad than it does on The New Yorker’s digital edition. Highlights might pop up mysteriously when a new page appears in other titles, and over time you come to know that these yellow bars indicate hot links. And then there are some titles where the entire text contents of a page could disappear with a double tap to reveal a page-filling background image.

Many magazines took the tablet platform as an opportunity to get tricky, oh-so-cool and dazzling with their interfaces and layouts after more than a century in print, where the navigation was pretty straightforward: you flip the page.

But could it be that readers are more put off than engaged with the variety of magazine interfaces now occupying their tablets? According to a survey of tablet magazine readers from GfK MRI’s iPanel, 72% said they would rather their digital editions followed the same format. The basic design philosophy for many interactive tablet titles has been to keep the reader tapping.

The engagement of touch platforms appears to impress publishers and their designers as too enticing to leave alone. And so many of the magazine apps pile on the tappable slide shows and demand some kind of user input at every turn -- all the better to enhance engagement, they suppose.

But the ever-changing navigation schemes and tap prompts may be disorienting to readers of multiple titles. In some facsimile editions, for instance, users advance pages in an article with a simple lateral swipe. But in more enhanced magazine apps that use the Adobe publishing platform, for example, a lateral swipe advances to the next article. Vertical swipes advance pages within an article in this case.

From a publisher’s perspective, any misgivings among readers about digital edition interfaces are not reflected in the popularity of these books. “Thus far, we’ve been getting regular, mostly positive, feedback from our tablet readers,” says Gregg Hano, SVP Corporate Sales and Technology Group, Bonnier. The internally developed engine Bonnier established for titles such as the PopSci+ app for Popular Science magazine and PopPhoto+ for Popular Photography, is among the more heavily enhanced among magazines for tablets. In some screens, for instance, background images will change as the user scrolls through foreground text that seems to float atop the display.

Hano says the company keeps in close contact with the user base to understand how they respond to innovations. He reports that in iTunes alone, PopSci+ has more than 55,000 paid subscriptions, and PopPhoto+ more than 30,000. “As long as we continue to see such strong growth in subs, it’s clear to me that we’re presenting our content in a way that serves the reader well,” he adds.

Matt Bean, AVP, Mobile, Social and Emerging Media for Rodale, says early indications suggest that readers of his enhanced tablet editions of Men’s Health and Bicycling are happy with the levels of interactivity. “No brand is the same, of course, and I'd even suggest that expectations might differ by platform,” he says. In fact, some publishers found that relatively unenhanced digital facsimiles on the Barnes & Noble Nook Color platform last year outsold more elaborately interactive versions on the iPad.

“But one thing is for certain,” says Bean. “Content is king, whether it's words or an elegant interactive execution done right.”

GfK MRI also found that users may not be as impressed as many publishers think by video. Fully 46% say video in digital magazines is just a “gimmick.” This response echoes an ongoing problem among magazines to achieve scale in their own on-site video productions. It has always been a challenge for magazines online to be perceived and consumed by their brand loyalists as video providers.

The same may be true for apps. Moreover, the sheer weight that video and other accoutrements add to a magazine app may be frustrating users, 48% of whom complain that their issues take too long to download. In fact, some individual  issues of magazine apps can be well over 100Mb. and even 200MB. Now that Apple has added its Newsstand model where issues can be downloaded in backgrounds automatically, users may find their 16GB iPads taxed.

To put the GfK MRI findings in perspective, however, it is not altogether clear that digital edition readers know yet what they want from these experiences. In conflicting responses, the researchers found that 67% say that when available, they prefer the electronic version. At the same time, 65% tell GfK MRI they find it more satisfying to read the print version. Convenience vs. satisfaction? Company SVP of Research Risa Beckers says about the results that readers are likely torn between the tablet version’s ease of use and portability and the fact that “paper magazines still have a special tactile appeal.”

Hano says that in the case of video in digital editions, for instance, we are at a stage similar to the early days of streaming media online. “I think it's important to remember that this is a relatively new way to consume content, and there's going to be learning and adjustments along the way,” he says. "Video content did not become popular on the Web overnight, but now Americans alone watch more than a billion minutes of Web video a year. It may take time to strike the right balance of video and static content on the tablet, and for users to adapt to the formats.”