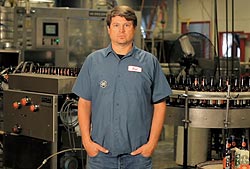 One of the new 30-second spots, dubbed “The Least Interesting Man in the World,” shows Breckenridge’s head brewer, Bob Harrington, standing motionless and staring with a blank expression as he watches bottle after bottle of the brand’s 471 IPA being capped by a brewery machine.

Harrington’s only line: “I like to drink beer. And when I do, I prefer good beer.” A voiceover concludes the spot with “Never stay thirsty, my friends.”

In the second spot, Harrington is shown, back to the camera, watching waves roll onto a sunny, pristine beach. As the view pans out, it becomes clear that he’s actually watching a large-screen TV while enjoying a Breckenridge Agave Wheat, whereupon he promptly flips to a football game. This spot has no lines for the brewer/actor, and no voiceover; instead, it ends with a screen message:  “Find Your Couch.”

If the spots happen to remind viewers of highly visible, high-budget campaigns from Dos Equis and Corona -- well, Breckenridge has no comment on that score.

What Breckenridge Director of Marketing Todd M. Thibault will say, however, is that the campaign’s point isn’t about attempting to position the brand’s beers against any specific brand or brands, but instead to humorously convey the message that producing good beer is Breckenridge’s sole focus.

“Many beer campaigns always seem to be talking about something else, like their cans’ new technology, or how you should drink their beer when you choose to drink beer,” says Thibault. “We talk about how we always drink beer, and how we like good beer.”

The campaign -– including the new spots and the 2011 TV spots -- is from Breckenridge’s agency, Denver-based Cultivator Advertising & Design.

Last year’s spots parodied big-brands’ focus on technological innovations, like chill indicators on cans. Those four 15-second ads were produced for $10,000. (Cultivator’s cost efficiencies for the brand include employing the production facilities at Fox 31 Colorado news -- as with last year’s ads, the new spots are being aired on that channel during sports events and Sunday prime time.) This year, the two longer spots were produced on the same budget.

The brand now has distribution in more than 30 states, but focuses its limited traditional marketing in its largest market -- Colorado -- relying on viral sharing of its spots to prompt beer lovers around the country to seek out its distinctive beers and ales.

In addition to being posted on Breckenridge’s own site (and promoted on its Facebook and Twitter accounts), last year’s spots were picked up by beer bloggers and critics –- a dynamic that the brewery hopes to replicate with the new ads.