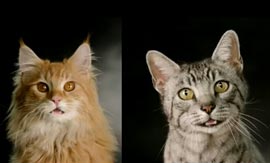 The Meow Mix Jingle is returning to the airwaves for the first time since 1996 to launch the brand’s Tender Centers cat food.

In a recent survey conducted by Kelton Research, 50% of respondents recall most -- if not all -- of the lyrics to the catchy tune. In addition, 81% of respondents claimed to have heard the Meow Mix Jingle in the last 18 months -- when in reality, the classic version of the jingle stopped airing in 1996, 16 years ago.

"The Meow Mix Jingle brings back a sense of nostalgia and is a classic advertising spot that many people can even recite by memory," said Sue Resnicoff, director of cat food marketing for Del Monte Foods, in a release.

The new 30-second TV spot includes a split screen with two different felines (a long-haired orange cat and a gray tabby) singing the famous “Meow” lyric in different tones. The English “translation” of their singing is communicated via subtitles.

According to the survey, the Meow Mix Jingle is the number two most memorable American jingle, second only to the Oscar Mayer song. The recognition isn't only coming from the human persuasion, either; 15% of respondents even said their feline can identify the jingle. (Note: This reporter’s dog started barking upon hearing it coming from the computer speakers.)

The digital age also takes a backseat to the cats: the survey concluded that more than one in three (39%) respondents know the Meow Mix Jingle better than all of their online passwords, including Facebook, their email account and more. In addition, 32% of all respondents admitted that the Meow Mix Jingle was easier to recite than the Pledge of Allegiance, although not as patriotic.

The Meow Mix survey was conducted by Kelton between Feb. 23 and March 1, using an email invitation and an online survey.

Results of any sample are subject to sampling variation. In this particular study, the chances are 95 in 100 that a survey result does not vary, plus or minus, by more than 3 percentage points from the result that would be obtained if interviews had been conducted with all persons in the universe represented by the sample.