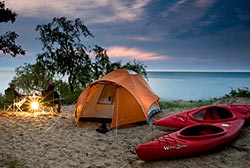 Michigan is launching a $12 million national ad campaign. It is the most the state has ever spent to promote the Great Lakes state as a tourism destination.

Creative continues the “Pure Michigan” theme that was launched in 2006.

The national cable for spring/summer 2012 runs through June. This year, four private sector partners – Ann Arbor, Mackinac Island, The Henry Ford and Traverse City – are contributing $500,000 a piece for a combined $2 million toward the national advertising campaign as part of the Travel Michigan Partnership Advertising Program.

Featured ads in the rotation can be viewed at michigan.org and include 14 Clubs, A Simple Sunrise, Dancing in the Streets, Gone Fishing, Lost & Found, Perfect Spot, Perfect Summer, Tee Times, The Potential of Water, Treasure and Up in the Air.