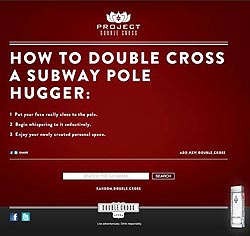 When you have a name like Double Cross Vodka, April Fool’s Day is just too good an opportunity to pass up.

The ultra-premium vodka brand -- distilled in Slovakia and launched (at least originally) specifically for the U.S. market in September 2008 -- will kick off its first official consumer campaign on April 1, premised on helping people “double-cross the mundane and frustrating moments of life.”

The campaign’s hub is a microsite, Projectdoublecross.com, where fans can pick up tips for turning the tables on annoying types like arm rest-hoggers, at-table texters, telemarketers and chatty urinal neighbors. In addition, visitors can post and share (through the brand’s Facebook or Twitter accounts) their own “double cross” ideas.

Examples: To double-cross a loud cell phone talker, stand directly in front of him/her, position your Double Cross martini to the side of your head as if it were a phone, and adopt the same tone/volume as the offending phone-talker as you actually respond to what he/she is saying. To double-cross a subway pole-hugger, put your face close to the pole and begin whispering seductively to it; then enjoy your newly created personal space.

The campaign, initially focused in New York, New Jersey and Massachusetts, is expected to drive traffic to the microsite and build brand awareness through ads put up in publicly available posting spaces (“wild postings”) in metro areas, particularly sites near restaurants/bars carrying the vodka brand. In addition, promotional posters, napkins and coasters will be distributed to bars and package stores throughout the three states.

The campaign, from DiMassimo Goldstein (DIGO), will be expanded to the rest of the U.S. and Canada later this year. In the U.S., Double Cross is currently available in 37 states, with strongest distribution in major East Coast cities. It is also available nationally at The Palm, Morton's The Steakhouse, Fleming's Prime Steakhouse & Wine Bar and Omni Hotels.

The vodka, which retails for $39.99 for a 750 ml bottle and contains 40% alcohol by volume, touts exceptional quality based on being seven times distilled and seven times filtered.

Lloyd and co founder John Gellner, recognizing an opportunity in the dearth of Slovakian-produced luxury goods, and vodka in particular, in the U.S., spent four years researching and working with Slovakian master distiller Jan Krak to produce the vodka, which uses locally grown winter wheat and mountain spring water sourced from local aquifers. The vodka has received a 95-point rating from Wine Enthusiast magazine and gold medals for taste and bottle design at the World Spirits Competition.

Double Cross’s name derives from the double-cross symbol on the Slovak flag and coat of arms. Its distinctive, clear, engraved rectangular bottle features lines of Slovak poetry in that language –- a shape and design specifically intended to differentiate it from other vodkas, according to Lloyd.

Up to now, Double Cross has focused nearly all of its marketing on trade efforts, including promotions for liquor stores and on-site events to build awareness with bar owners/bartenders and encourage patron sampling, says Lloyd. Many of those events have been co-sponsored by high-end partner brands, including Rolls Royce, Ferrari, Audemars Piguet Swiss luxury watches, and Flexjet.

Double Cross is, of course, going up against long-dominant Grey Goose in the ultra-premium vodka space. But Lloyd notes that “with the possible exception of Ciroc,” there’s been little brand movement in top-shelf vodkas for the past 15 years. He believes that the time is right for the advent of “next generation” top-shelf vodkas, and Double Cross is positioning to be among them.