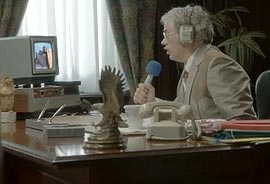 The Sierra Club is launching an advertising campaign that talks about the dangers of coal. The effort uses humorous and (hopefully) viral videos that feature TV personalities and shows from the 1980s. The Sierra Club says the ads use irreverent humor to address and bring attention to the harm caused by coal pollution.

“These ads aim to do for coal what the Truth campaign did for tobacco -– expose the fact that coal pollution is dirty and dangerous, and that coal executives will say anything to make people believe that coal is safe -- while making our kids sick,” said Michael Brune, the Sierra Club’s executive director, in a statement.

The new effort extends the organization's two-year-old "Beyond Coal" campaign. The Sierra Club says the effort, intended to promulgate the virtues of wind and solar, has helped retire 106 of the nation’s over 500 aging coal-fired power plants. It is the first major video campaign that the Sierra Club has launched following a $50 million grant from Bloomberg Philanthropies in July 2011.

One of the videos is a take on a badly dubbed TV show on how to draw nature paintings. Bob Ross is a pro-coal voiceover guy, dubbing the artist's voice. The artist has rendered a scene of beautiful mountains, except for one that has been strip mined for coal. Text says: "Coal companies have destroyed over 500 mountains in Appalachia."

Mary Anne Hitt, director of the Sierra Club’s “Beyond Coal” campaign, characterizes coal as: “Dirty, outdated, and bad for our kids’ health. Coal is a 19th century fuel that is making our country sick and getting in the way of a prosperous future and clean energy jobs,” she said.

The effort is by San Francisco-based Mekanism -- the first time the firm has teamed with a major non-profit organization.

“We wanted to work with the Sierra Club because we believe in the message of moving the nation beyond coal and towards clean energy, using humor and social media,” said Tommy Means, Mekanism’s ECD.