Etch A Sketch Capitalizes On Notoriety 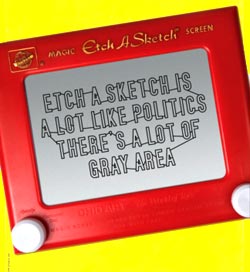 After finding itself at the center of a political controversy earlier this month, Ohio Art, maker of Etch A Sketch, has moved quickly to capitalize on having its name in the news by creating a social marketing program that ties directly to the controversy while encouraging voting.

“This is one of those things that you work for,” Scott Mills, director of digital for Ohio Art’s agency, Team Detroit, tells Marketing Daily. “It’s a prime example of how digital and social can move quickly.”

Earlier in March, Eric Fehrnstrom, an advisor for Republican presidential candidate Mitt Romney, likened the campaign’s primary strategy to playing with the toy, saying: “It’s almost like an Etch A Sketch. You can kind of shake it up and restart all over again.” Romney’s opponents quickly jumped on the statement, and the comparison become the subject of cable news (and late-night comedy) fodder.

Rather than let the moment pass, Etch A Sketch jumped into the debate, sending out a series of three ads via Facebook and Twitter, saying that the brand was staying neutral in the presidential race. The ads feature the iconic product with headlines such as “Etch A Sketch is a lot like politics, there’s a lot of gray area,” and “We have a left knob and a right knob for each political party (But remember, when we both work together, we can do loop de loops).”

“It’s the promise of digital that everyone has been hearing about for the past 10 years,” Mills says of the campaign -- “to come up with great, crisp, sharp ideas to be part of the conversation and stay on message.”

Each of the ads drives consumers to a newly redesigned Web portal, that encourages people to “Shake It Up, America.” On the portal, people are encouraged to “exercise their freedom of expression,” and register to vote. In the near future, the company promises, consumers will also have the ability to buy either a blue or red Etch A Sketch, depending on their political leanings.