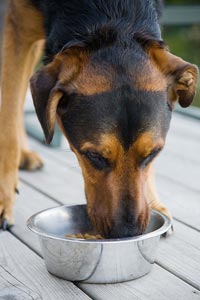 The economy does not seem to affect pet food shoppers, who continue to migrate into the higher-preced pet specialty channel, according to U.S. Pet Market Outlook 2012-2013, a report from market research firm Packaged Facts.

Although shoppers are value-oriented in buying other products, supermarkets and discount stores have seen their pet product shopper base decline. Similarly, while store brands overall are more important than ever across the consumer packaged-goods spectrum, pet food remains private-label resistant, an outpost of shopper loyalty to national brands.

U.S. pet industry sales reached $56.67 billion in 2011, up from $54.56 billion in 2010. Although a modest 3.9% increase percentage-wise, the 2011 figure represents $2.1 billion in additional market value. Natural, organic, and eco-friendly products continue to advance, as do pet health products and services including medications, supplements, and insurance.

Across all areas of the U.S. pet market, the net fallout from the recession has been greater market polarization, with healthy growth rates at the upper (pet specialty) and lower (strictly price-focused) ends of the market, and little growth in the middle, said David Lummis, senior pet market analyst at Packaged Facts.

“Among super-premium pet products, natural (in its many expressions) remains the top selling point, while price plus a better selection of national brands has given price-focused channels like dollar stores and warehouse clubs a leg up,” Lummis tells Marketing Daily. “Meanwhile, retailers and marketers in core mass channels including supermarkets and discount stores have been struggling to sharpen their brand propositions in order to avoid coming across as ‘middle of the road.’”

Packaged Facts’ March 2012 Pet Owner Survey indicates that nearly nine out of ten pet owners agree with the statement “I consider my pet(s) to be part of the family,” with 61% strongly agreeing and 28% somewhat agreeing, and that nearly two-thirds view their pet as their best friend, are spending more time with their pet, and enjoy purchasing products that pamper their pets.

Pet owners therefore are highly receptive to products and services that replicate the ones they prize for themselves. Examples include veterinary procedures like chemotherapy, MRIs, and hip replacements; pet supplements featuring glucosamine or omega-3; human-grade pet foods containing superfruit or touted as gluten-free; designer pet supplies such as Burberry apparel and Simmons Beautyrest pet beds; and services including luxury boarding options and even a pet-specific airline, Pet Airways.