Ever wonder how technology similar to Google Street View would render in national parks? Look no further than Nature Valley Trail View, a site that lets explorers virtually visit more than 300 miles of the Grand Canyon, Yellowstone Park and the Great Smoky Mountains.

To capture the footage, a team of eight, including three McCann creatives and two McCann integrated producers, hit the trails eight to ten hours a day, averaging six to thirteen miles of trails daily, over the course of two months. At least we know they were outfitted with an endless supply of granola bars for their journey. 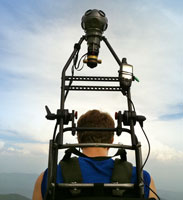 The McCann team had to physically train for the project. “Our Executive Integrated Producer, Catherine Patterson, put us all on a training regimen of running, biking, hiking -- working up to 50+ miles a week -- starting 2 months prior to starting on the first park,” said Leslie Sims, executive creative director, McCann New York.

The goal of the campaign is to get nature lovers to see what they’re missing and encourage them to experience the beauty of the parks in-person. 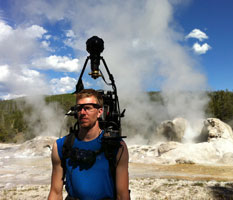 The project took more than a year to complete with help from agency partners InTheMO, Your Majesty and editors from Backpacker Magazine, who helped guide the hikes.

“The camera we used was the Dodeca 2360, which has a gyroscope and 11 lenses which captured footage we then stitched together to create the immersive 360 views you experience on all the trails,” said Sims. “It's pretty bulky, but was contained in a 40-lb backpack, which our superhuman cameraman, Brandon McClain, carried the entire way. The production team had rigged the camera with a handset and goggles so Brandon could operate the camera using one eye, while watching the trail with the other as he hiked. It allowed for our zero-impact-on-environment mandate, though not exactly what you'd call 'portable.'”

Once footage was shot, “Your Majesty spent six months stitching together tens of thousands of high-res images to build out the site,” Sims said. 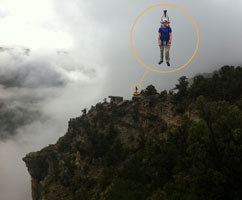 Down the road, Trail View plans to digitize other U.S. National Parks along with international locations.

The campaign’s biggest challenges? “Bears. And finding the camera didn't function in extremely high temperatures,” Sims said. “Case in point, we were slated to begin filming in the Grand Canyon in July, and temperatures reach above 100 degrees Fahrenheit that time of year. So we rearranged the shooting schedule to start in the Great Smoky Mountains and finish with the Grand Canyon in September.”

For each Nature Valley Facebook “Like” during National Parks Week, April 21-29, the brand will donate $1 to the National Parks Conservation Association, up to $50,000.