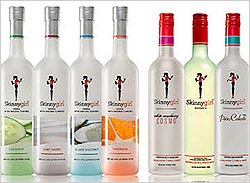 2011 was a healthy year for spirits overall, the Technomic data show. Total spirits volume grew 3.5%, while volume among the top 250-selling brands showed slightly slower growth of 3.1%. Those top brands accounted for 88% of the country’s total 199.7 million 9-liter cases, and 89% of total retail spirits sales.

According to the Distilled Spirits Council, U.S. spirits sales increased 4% last year, to $19.9 billion, to account for nearly 34% of the country’s total alcoholic beverages market.

On a category basis, vodka brands continue to dominate the top 250, followed by cordials and liqueurs, rums and straight whiskies.

2010’s largest brands -- Smirnoff, Bacardi, Captain Morgan, Jack Daniel’s and Absolut -- maintained their positions in 2011.
However, smaller brands realized significant growth. The bottom 50 within the top 250 achieved overall volume growth of 6.5%, and expansion among brands not making the top 250 actually outpaced that of those leading brands, according to Donna Hood Crecca, senior director of Technomic’s Adult Beverage Resource Group.

“Some of the more established top 250 brands were affected by the recession and may now be experiencing a somewhat slower growth pace than prior to the recession,” says David Henkes, VP and head of the Technomic group.”Others, however, are enjoying tremendous gains as they tap into various consumer trends.”

“Among the fastest-growing spirits brands, we see a definite shift toward sweet and also spicy flavors, with flavored vodka, rum and whiskey products gaining steam,” Hood Crecca reports. “This is a change from the savory flavor profiles that had been popular in recent years.”

In addition, particularly within the vodka category, innovative, value-priced products are emerging even as several established premium- and ultra-premium priced brands continue to growth, she notes.