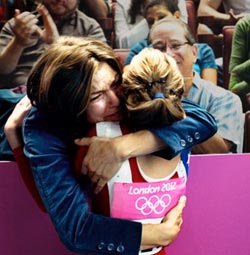 With just 100 days left until the Summer Olympics in London, marketers are bringing their Gold Rings game, with Procter & Gamble, McDonald’s and Oakley all unleashing big campaigns.

Procter & Gamble, which is expanding its attention-getting “Thank You Mom” campaign to make it the biggest in the 174-year-old company’s history, has released its “Best Job” video on YouTube and Facebook, a short tearjerker that celebrates the role that moms play in raising Olympians, directed by Alejandro González Iñárritu. The film, the basis of the TV spots that P&G will run leading up to the games, was shot in London, Rio de Janeiro, Los Angeles and Beijing. The campaign will run online, in social media, TV and print, as well as with in-store promotions, through August.

Overall, P&G has committed to raising $5 million to support local youth sports programs around the world via this effort, through a portion of sales and donations from such brands as Pampers, Tide, Gillette and Pantene.

McDonald's is tipping its hat to the 100-day mark with its Champions of Play program, developed for kids ages 6-14. The effort includes bringing 200 lucky kids, many of them acting as young journalists, to behind-the-scenes experiences in London, and a microsite devoted to its Olympic Games Challenge, featuring nine Olympians. The company says the effort will be the largest in its Olympic history.

Kids can try their hand at the Champions of Play program, previewing now and officially launching in early June, which combines imaginary events (running round the world and pole vaulting to the moon, for example) with real life activities.

During the next 100 days, the company will continue to partner its family of athletes with artists from around the world, including U.S. sprinter Lolo Jones, U.S. beach volleyball player Kerri Walsh, British cyclist Mark Cavendish, South African sprinter Oscar Pistorius, Australian cyclist Cadel Evans and Spanish triathlete Javier Gomez. The art pieces inspired by each athlete’s “Beyond Reason” vision are scheduled to be displayed together at the London Design Museum on July 26, the night before the opening ceremonies.

Oakley, a subsidiary of Luxottica Group, says the effort is timed to help support its new RadarLock performance sunglass.