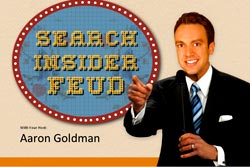 In five years, what search engine will become your default, and what industry vertical will eventually benefit most from ads integrated with voice search? These and other questions for executives at agencies, platform providers and brands during the search feud game at the MediaPost Search Insider Summit on Monday led by Kenshoo CMO Aaron Goldman, provide insight into the mindset of search engine marketers (SEMs).

Search contestants broke into two groups -- Agency Anarchy, and Misc. Mayhem -- answering questions in a Family Feud style related to a survey of about 100 SEMs that Goldman ran prior to the conference.

The team played three rounds. The winner could tell Goldman to rap on any topic of their choosing. And while Search Feud appeared to be entertaining, the real value came from the survey data and both teams' ability -- or lack thereof -- to pinpoint the trends.

In five years, what default search engine will you use? Some 77 survey participants said some type of platform from Google; followed by 9, Facebook; 6, not sure/don't know/not created; 3, Google/Yahoo/Bing Merger; and 3, Bing.

Bonus-round questions ranged from what type of device people would search from in the future to the vertical that will most benefit from voice search.

The first bonus round asked: In five years, what device will you search from the most? Sixty-nine survey participants said phone; 11, tablet; 7, not created yet; 5, mined from a chip in the brain; and 2, PC/desktop.

What industry vertical would benefit the most from ads integrated with voice search? Forty-six said Retail/Restaurants/Local; followed by 37, Travel; 11, Entertainment/Music; 3, Banking; and 2, Automotive.

And if you could pick any living person to be the voice of a search engine, who would it be? Nineteen survey participants said Morgan Freeman; followed by 18, James Earl Jones; 6, Allstate guy/Dennis Haysbert, 2, Alec Baldwin; 2, Alan Rickman; 2, Tim Allen; and 1, Bobcat Goldthwaite.