Zippo Rocks Out With New Campaign 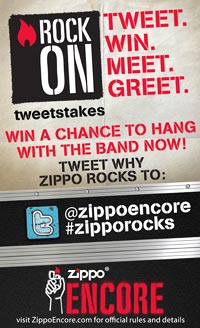 People are still using lighters, so no doubt Zippo Manufacturing Co., the Bradford, Pa.-based maker of the now-retro-cool Zippo, is hoping that people are still flicking them on at rock concerts to signal their devotion (or nascent pyromania).

The company has launched a musical event, sweepstakes, giveaway, social media and online marketing program with retail tie-in called “Zippo Encore.” The effort, with the tag “Rock On,” aims to boost sales and increase Zippo’s social media presence and product awareness among males 18 to 35.

The campaign, via East Aurora, N.Y.-based Cenergy, encompasses three national, active rock music tours in succession. The “Avalanche” tour runs now through April 25 and includes 21 performances in 17 states -- from California to Rhode Island -- at each of which Zippo will be the largest, and presenting sponsor. The feature act is Shinedown.

Next is the “Mayhem” tour, featuring Slipknot, which will include 26 performances in 23 states -- Washington to Georgia -- between June 30 and Aug. 5. Finally, the “Uproar” tour, with venues and acts still to be determined, will extend from late summer into early fall.

At each of the approximately 80+ performances, Zippo will have a flame-themed, metal kiosk staffed by t-shirted brand ambassadors who will encourage audience participation in the Zippo promotions, as well as vend Zippo lighters.

Concertgoers will be invited to enter the “Tweet & Greet Tweetstakes” by sending a tweet on “why Zippo rocks” to @ZippoEncore, hashtag #zipporocks. At each concert, two randomly selected tweeters will be invited backstage, with a guest, to meet the featured band.

All attendees will be offered up to 10 free music downloads with the online activation code printed on handout cards, of which Zippo says it expects to give out around 30,000.

A new website, www.ZippoEncore.com, also designed by Cenergy, will be a hub for all tour, Tweetstakes and musician info. Additional content includes streaming tunes and videos, and ongoing “roadie” tour blogs by different Zippo ambassadors. There is also a link to Zippo’s existing e-retail site.

Colleen Aungst, director of the Zippo account at Cenergy, says the tours were the sweet spot for Zippo, as the focus for all three is straight ahead rock. "These three tours are a bull’s eye for them," she says. "All three have a similar look and feel, similar music -- hard rock."

She says the tours are different in size. The Avalanche tour, wrapping up this week is smaller, filling House of Blues-sized venues. The Mayhem and Uproar tours are in amphitheaters, and are all-day festivals. Zippo will have retail spaces at the concerts and will -- of course -- sell concert-branded lighters.

Aungst says the Twitter element has vastly increased Zippo's following on the social platform. "They weren't doing much with their Twitter handle so we launched it with the tour, and it's just skyrocketed," she says, adding that numbers of visitors to ZippoEncore.com have also spiked over the past month.