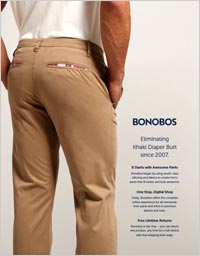 Bonobos, the cheeky online purveyor of khakis for young men who hate to shop, is jumping from virtual retail to physical. The company recently announced a partnership with Nordstrom, and is headed to Boston, to open its first Guideshop.

The company, which has gotten plenty of Internet mileage out of its promise to eliminate unsightly “Khaki Diaper Butt,” also plans to introduce a collection of golf clothing this fall, and says that the expansion moves are just a natural part it evolution.

“We’ve built the brand by having a great product, paying close attention to customer service, and using an irreverent tone to appeal to guys who don’t like to shop and aren’t into fashion,”  Tracy Keim, VP/ integrated marketing, tells Marketing Daily. “The next step is to take that value proposition to a broader audience.”

Nordstrom makes “the perfect partner for Bonobos,” which claims to be the biggest brand of Internet clothing, “because we both have this intense focus on customer service. We know customers will get the same kind of treatment there that they get from the customer service ninjas on our site.”

And the opening of its Guideshop in Boston, its only store outside the company’s New York City headquarters, it will offer personalized, one-to-one service that it describes as a hybrid of a personal shopper, tailor and stylist. An additional Guideshop is scheduled for Silicon Valley this summer.

Industry observers say that, increasingly, brands will have to find new ways to exist in multiple channels, and that just as conventional retailers need a web presence to thrive, online retailers will need a physical one. That  prediction gained buzz when reports surfaced early in the year that online giant Amazon is testing brick-and-mortar store concepts.

“In 10 years, this won’t even be a conversation,” Phyllis Dealy, partner at Woods Witt Dealy & Sons, an ad agency in New York. “Everyone will be online and offline.”

The partnership with Nordstrom, she says, is a clear example of how brands can leverage one another for broader distribution. “There isn’t a huge downside risk for either brand,” she says. While Millennials infamously turn up their nose at department stores, the Seattle-based Nordstrom “does have a cool factor, even if it’s not as relevant a brand for Gen Y. This lets Nordstrom reach a little younger, and Bonobos go a little broader. Even if people leave the store and then go home and buy pants through the website, they had a positive experience at Nordstrom, so it’s a win/win.”