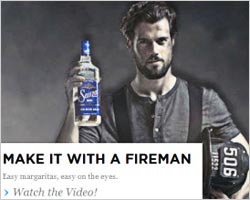 A new Sauza Tequila video that’s encouraging women to “Make It With a Fireman” is generating viral heat.

The video’s real point is to get women to make a margarita recipe featuring Sauza Blue Tequila, as demonstrated by a hunky “fireman.” (Actually, a hunky model playing a fireman, but the desired effect is the same.)

Much of the two-minute video is devoted to the fireman gazing intently at the viewer as he riffs about what he does (while doffing his fireman’s coat to better reveal his T-shirt-clad, toned physique).

“Being a fireman is about more than just putting out blazes and giving kittens CPR,” he confides in a soulful yet suggestive voice. “Sometimes my duty demands that I fan the flames…like when a call comes in from a lady who needs immediate assistance. Maybe she needs help with a computer thing. Maybe she wants to go antiquing. Could be as simple as understanding that walking in heels is hard…or that reliving that summer in Paris is easy…” (He speaks the last phrase in French; an English subtitle is provided.) Or…“Maybe it’s ladies’ night in, and she wants a simple, delicious recipe for margaritas, with a twist.”

Following his demonstration of that recipe, he adds: “Yes, that’s what I’m trained for…whether it’s to help her choose leggings or pants, telling her that leggings are pants, or discussing leggings and jeggings versus pant-pegging at her next ladies’ night in, I’ll come to the rescue. Don’t call me a hero…just call me.”

Obviously, the video -- from Sauza agency Euro RSCG Chicago -- is highly tongue-in-cheek, and that tone is heightened by a prominent cameo role by an adorable kitten (“kittens make everything better”), as well as a bluesy background instrumental that wouldn’t be out of place in a strip club.

“At its core, this campaign is about delivering convenient recipes for fresh Sauza margaritas to women,” says Sauza Tequila brand manager Amanda Lamb. “The fireman is the hook that gives our target a reason to watch and the recipe a reason to stay.” (The specific target is women 25 to 39.)

Sauza is fanning the viral flames with banner ads on targeted sites (such as Allrecipes.com, YouTube and multiple pages on Yahoo, including targeted log-in pages); spotlighting the video on its own newly redesigned site (which offers ample recipes and entertainment tips); and generating buzz through key women’s blogger sites and media/public relations efforts. Downloadable coupons are being offered through the brand’s site, Facebook page and other channels, and marketing/promotional activity will be stepped-up around Cinco de Mayo.

In addition, the Beam, Inc. brand has launched a Sauza Tequila Spa Getaway Sweepstakes on its Facebook page (which currently has about 133,000 “likes”), and its branded tour bus is now making stops around the country.

Might some women be offended by the stereotypes being blatantly played-upon in this video? Of course. However, as Huffington Post associate editor Emma Gray points out, the stereotypes (“Women like men in uniform! Women like kittens! Women have tech issues they can’t handle themselves! Women chatter endlessly about jeggings and whether they are pants!) are “exaggerated enough [in this video] that it makes fun of those clichés more than it reinforces them.”

On YouTube, the video has thus far generated 1,250 likes to 17 dislikes. One sample comment: “Get this commercial on TV! Best marketing I’ve ever seen.” Another: “Honestly, this is how you should be attempting to sell me everything from now on. Life insurance, feminine hygiene products, beer, fast food, anything really. Show me the kitten-toting, drink-mixing, French-speaking fireman, and I’ll show you the dough.”
As to whether some real firemen might object to the video as being misleading and/or demeaning in regard to the true, extremely dangerous nature of their jobs (despite the flattering, macho-yet-sensitive image of firemen portrayed), so far, if they exist, it’s hard to find such comments on YouTube or through general Web searches.