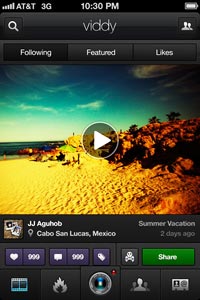 In the wake of Facebook’s $1 billion deal for Instagram, the spotlight has fallen on a new crop of video-sharing apps moving up the charts like Viddy and SocialCam. The photo and video category as a whole has been the fastest-growing in apps time spent per active user between October and March, up 89% to 231 minutes.

Other rapidly rising categories include music (72%), productivity (66%), social networking (54%), and entertainment (40%), according to new data from app analytics and advertising firm Flurry.

While these apps have gained greater attention lately, he points out that time spent with photo and video apps has been building for some time -- with growth up 166% since July 2011, and 141% since March 2011.

That year-over-year growth rate is twice the 71% increase in time spent watching YouTube on the desktop Web. Actual minutes spent viewing video online is still well ahead of apps, at 425 total minutes versus 231 in March.

But the gap is closing. A year ago, Internet video consumption on YouTube outpaced that on iOS and Android apps by more than a 4-to-1 ratio. “During 2012, however, is where things get interesting. As online video consumption dropped by 10%, mobile app video consumption increased by another 52%,” noted Farago. While it can’t be assumed that mobile video apps are cannibalizing YouTube, Flurry views the shift as a sign of disruption.

“Think of it this way: With every mobile video you share of friends, family, vacations, parties and weddings, you are likely loading another bullet in the chamber for Web 3.0. For YouTube, it appears they need to run -- outrun -- your gun,” states Farago. Of course, if HTML5 development shifts mobile media consumption back in favor of the mobile Web, YouTube will have the last laugh.

The Flurry data also highlighted the growing competition that games face from other app categories, especially photo and video titles, in terms of time spent. In addition to Viddy and SocialCam, it pointed to “apps with momentum” including Path, Skout, Evenote and Spotify.

It’s not quite time to write off games, considering that they still dominate the top 10 app charts in iTunes and Google Play. Yesterday “Angry Birds” creator Rovio reported 2011 revenue of $106 million. If that figure tumbles in 2012, or growth slows, that would surely be a sign that game apps are no longer flying high.

The Flurry findings were based on a sample of 8 million active mobile app users across all app categories. The company's analytics software is used in 180,000 apps for some 67,000 companies across iOS, Android, HTML5, Windows Phone and BlackBerry.