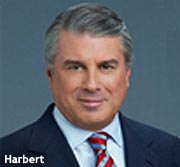 It won’t happen this upfront, but Ted Harbert, the chairman of NBC Broadcasting, moved the ball down field Monday on what could become a major battle on Madison Avenue: whether to shift to C7 ratings.

Harbert suggested a rise in time-shifted viewing means networks are undercompensated with the current ratings system that drives the national marketplace. The industry standard uses a C3 number, which rolls up commercial viewing over a three-day period after broadcast.

“It’s time to consider a move to a C7 metric,” Harbert said at the NBC upfront presentation.

It was a surprising venue to launch the charge. Upfront presentations are usually reserved for some plugs about network progress and a focus on programming, rather than hinting about contentious negotiations.

Then again, Radio City Music Hall was filled with media buyers, and it was a way to reach masses of them at once. SMGX, the large media buying entity, didn’t seem ready to shake hands, tweeting: “While that is great for NBC, is it good for our clients?”

Buyers are likely to resist since it would give a network higher ratings, which would raise ad prices. A C7 move could become a negotiating point over the next year, earning increasing prominence much like the shift to C3 from live program ratings was several years ago.

Continuing a business conversation -- though this time with a more cooperative theme -- Harbert suggested that buyers and sellers fight Dish Network’s new DVR function allowing viewers to zap all ads in broadcast shows a day after their debut. “This is an insult to our joint investment in programming, and I’m against it,” he said, reiterating opposition first expressed Sunday.

Harbert also said adopting a sturdy cross-platform measurement system is critical, now that so much viewing is taking place on mobile devices and laptops. “If we’re going to spend all this money on content, it still needs to be measured and monetized,” he said.

Until now, consumption off the TV screen has been minuscule enough that it hasn’t been much of an issue to buyers and sellers, he said. Now, the inflection point has arrived -- and he urged industry cooperation on putting a multiplatform measurement system in place, saying it would drive ROI for buyers.

“We just can’t wait and wait some more for Nielsen to do it,” he said.

After Harbert left the stage, a focus on programming emerged. The chief of NBC entertainment Bob Greenblatt spoke about moving “The Voice” to the fall, adding a second version to the midseason run. “We have no illusions that it will take down every musical show out there,” he said.

He also announced that “30 Rock” would end its run with 13 episodes this fall and a two-hour finale.

On Sunday, NBC announced its fall schedule that is heavy on comedies, with at least an hour on four nights a week. A J.J. Abrams sci-fi drama, “Revolution” will follow “The Voice” on Mondays.

News magazine “Rock Center with Brian Williams” takes over the former NBC drama stronghold of 10 p.m. on Thursdays. “Chicago Fire,” about a Windy City fire squad, will air Wednesdays at 10 p.m. with a cameo by Chicago Mayor Rahm Emanuel.

“Celebrity Apprentice” is set for midseason, and some former stars of the show may return. “The Biggest Loser” is on the bench, giving NBC something to fill hours with after some programming inevitably is cancelled.

Three new comedies are being held for midseason, including “1600 Penn,” about the rebellious son of the president.

A promising midseason reality series from producers Mark Burnett and Dick Wolf, “Stars Earn Stripes,” seems inspired by the Navy SEALs assassination of Osama Bin Laden. Celebrities will take on the challenge of doing what the military does in training.