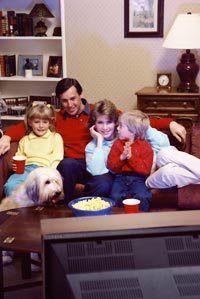 Despite the increasing number of options available to consumers, they’re still watching the majority of their video programming on television sets -- a behavior that has some effect on consumers’ purchase considerations.

According to the Consumer Electronics Association, viewing of television programming is up 28% over the previous year, with consumers citing factors such as convenience and the appeal and variety of programming as their top factors for the increase.

Two-thirds of consumers said HDTVs were their primary viewing devices, although other devices such as laptops (62%), desktops (55%), smartphones (33%) and tablets (17%) were gaining in popularity.

“Certainly there’s a lot of things going on that could collectively dethrone the television from its current perch,” Shawn DuBravac, the CEA’s chief economist and director of research, tells Marketing Daily. “But for now, TV is the primary device for video consumption.”

The continued dominance of HDTVs as the primary viewing device factors somewhat into consumers’ preferences when it comes to purchase considerations, DuBravac says. Among consumers who plan to purchase a television in the next 12 months, nearly half (48%) will be doing so to replace an aging, obsolete or broken set.

Of them, half will be looking for a better picture quality in a new display and a similar amount will be looking for a larger screen size. Among the other features consumers are looking for: Internet connectivity (25%), OLED display (21%) and 3D capabilities (24%). DuBravac notes, however, that the two main drivers behind television sales are price and features.

While televisions continue to dominate the video viewing world, consumers are also using other devices to watch their programming. Forty percent of consumers said they were watching more programming on portable video devices than they were a year ago. Many of those devices are being used in conjunction with television.

Two-thirds of consumers (66%) watching video on television reported they were simultaneously using other consumer electronics devices. Not surprisingly, the behavior is more prevalent among younger consumers than older consumers.