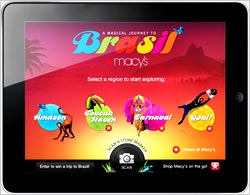 At last, Macy’s is taking the wraps off its “Brasil: A Magical Journey” with an advertising and digital extravaganza, including augmented-reality shopping apps and a fund-raising effort that will benefit the Amazon rainforests.

The celebration of all things Brazilian will include departments ranging from food to gift shops to apparel, with such limited-edition collections as  “Francisco Costa for Calvin Klein,” “FALCHI by Falchi” and RACHEL Rachel Roy + Seu Jorge.

In addition to in-store events -- including exhibitions from Brazilian artists, and a contest to win a Brazilian vacation -- the Cincinnati-based retailer is also using augmented-reality apps and QR codes to showcase the collections, all meant to “truly capture the spirit of this rich and intriguing culture.”

Using smartphones, shoppers can follow the Brazilian journey throughout the store, with QR codes triggering augmented reality experiences of a trip to the Amazon, Carnival, a soccer game and interaction with a toucan, it says. Each allows customers to step in the frame and take a photo, which can be uploaded via email or Facebook.

In about 300 Macy’s stores, it will also introduce “O, Mercado, the Market at Macy’s,” featuring 100 exclusive items, with 10% of the sale price benefitting The Nature Conservancy’s efforts to protect the Brazilian Amazon rainforest.

A special shopping pass, available for a suggested $3 donation, will also generate up to $1 million in rainforest donations. Shoppers will get a 15% all-day discount, with 100% of proceeds going to the cause.

Separately, the company says it is rolling out a limited-edition collection from Kara Laricks, winner of NBC’s “Fashion Star.”