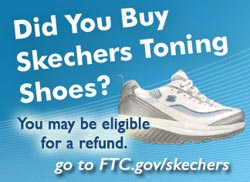 Skechers USA, Inc. has agreed to pay $40 million to settle Federal Trade Commission charges that the company deceived consumers by making unsubstantiated claims in its advertising that its Shape-ups footgear would help people lose weight and strengthen and tone their buttocks, leg and abdominal muscles.

The FTC also alleged that Skechers made deceptive claims about its Resistance Runner, Toners and Tone-ups shoes.

Consumers who purchased any of these toning shoes can file for refunds through the FTC (www.ftc.gov/skechers) or through a court-approved class-action lawsuit.

The FTC/Skechers settlement is part of a broader agreement, also being announced today, resolving a multi-state investigation that was led by the attorneys general of Tennessee and Ohio, and included AGs from 42 other states and the District of Columbia.

The FTC settlement also bars Skechers from making any further claims for its toning shoes about health/fitness-related benefits unless they are true and backed by scientific evidence.

In announcing the FTC settlement with Skechers, David Vladeck, director of the FTC's Bureau of Consumer Protection, said: "The FTC's message, for Skechers and other national advertisers, is to shape up your substantiation or tone down your claims." He added that FTC standards regarding advertising claims are very clear.

Vladeck said that Skechers not only made false claims unsubstantiated by clinical studies, but incorrectly reported the results of studies (stating, for example, that wearers of the shoes lost weight, when they actually gained weight). The FTC said that, in some cases, Skechers also made false claims that its toning shoes could deliver cardiovascular benefits.

The Skechers probe and settlement are part of broader FTC efforts to crack down on “over-hyped” ad claims. Vladeck said that, given that health/fitness claims can be particularly effective in driving sales, marketers of all kinds of products, both consumable and non-consumable, should take steps to guard against making unsubstantiated, deceptive health/fitness claims.

As examples of the FTC’s focus on such claims, Vladeck cited its $25-million settlement last fall with Reebok -- also over allegedly deceptive claims regarding toning shoes, plus toning apparel.

Other examples of FTC actions regarding health/fitness claims in the past 18 months cited by Vladeck include settlements with Dannon regarding its digestive-health claims for its Activia yogurt and DanActive dairy drink lines; with Orek regarding its claims that its Halo vacuum and ProShield Plus air cleaner could reduce the risk of contracting flu and other illnesses; and with Beiersdorf regarding its claim for Nivea My Silhouette! skin cream that the product could help consumers slim down/reduce their body sizes.

The refund amounts to be received by Skechers purchasers (assuming that the court approves the settlement terms) will depend in part on how many consumers file for refunds, according to Vladeck.

However, he said that the FTC “hopes” that at least $22 million to $23 million of the $40 million settlement (after administrative/legal costs) will go back to consumers in refunds, and that individuals will receive substantial compensation toward their purchases of the shoes.

Asked why the settlement with Skechers is so much larger than that with Reebok, Vladeck said settlements in large part reflect the company’s market share/sales.

According to the FTC’s release about the settlement, Skechers “was the market leader in the toning footwear category,” and industry-wide sales of such shoes peaked in 2010 at close to $1 billion.