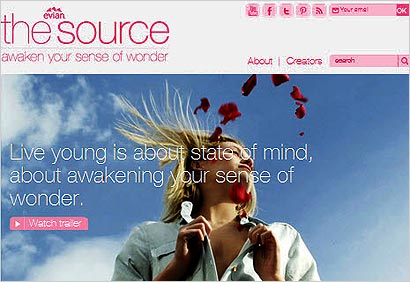 The site, subtitled “Awaken your sense of wonder,” seeks to promote on a daily basis Evian’s “vision of youth” -- meaning “living young” by nurturing that sense of wonder and other “positive values of youthfulness” -- by being a hub for inspiring content from around the world, said Evian global marketing director Cécile Turkel.

The site will offer original content created by directors sponsored by Evian. The principal members of this “creative brand network” are Sébastien Montaz-Rosset, Anthony Headley, Nicolas Pelloille, Laurent Pralong and Camille Bovier Lapierre. The first video to be featured is a “manifesto” on the wonder/youth theme from Spanish director Ramón Ayala.

The previous digital efforts in Evian’s ongoing “Live Young” campaign are hard acts to follow. Its 2009 “Roller Babies” video set a Guinness World Record as of July 2011 by having been viewed 65.5 million times, and 40,000 people have participated in its interactive 2011 follow-up, the “Let’s Baby Dance” video clip campaign.

After the success of those events, the Source site “marks the start of a new era for Evian’s online strategy,” according to Evian global digital manager Alexis Thobellem. The goal: Create an ongoing digital presence that engages Internet users in a “close and sustainable relationship.”