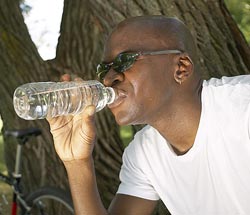 After declines during the recessionary years of 2008 and 2009, U.S. bottled water consumption had its second year of growth in 2011, according to Beverage Marketing Corporation's annual analysis of the market.

Last year, domestic, non-sparkling waters accounted for 96% of total volume, and all four segments within this category showed some growth. However, the 5.4% growth of still water in single-serve PET bottles (on top of 6.7% 2010 growth), to 5.8 billion gallons and a 64% share, limited the growth of other still-water formats.

Volume for retail bulk (1- to 2.5-gallon containers) grew just 0.3%, leaving it with an 11% share.  Direct delivery, which had the largest share as late as the mid-2000’s, now has a 12.9% share, and the volume of still water delivered to homes and offices has slipped from close to 1.4 billion gallons in the early 2000’s to under 1.2 billion gallons in 2011. The regional vending segment (refillable jug containers) continued to see small growth last year.

During the first decade of the 2000’s, the imported water segment -- the smallest of them all -- registered double–digit percentage growth in some years, and equally sizeable contractions in others. After an up year in 2007, imported water's volume fell sharply in 2008, plummeted precipitously in 2009, and continued to decline somewhat in 2010. But in 2011, it inched up modestly.

Meanwhile, while sparkling water continues to represent a small share of overall bottled water volume, last year, it grew at a faster rate than any other type, including retail PET bottles.