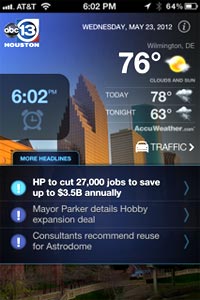 ABC has a wake-up call for its local TV station viewers. In keeping with the morning news for which most stations are known, the ABC Owned Television Stations Group has started rolling out the alarm clock app for smartphones in the major markets. The app is designed to give at-a-glance basic information and simple functionality. Available now for the ABC13 station in Houston, the model will be rolled out in the next few weeks to the remaining seven stations.

The app is a clean and simple design that has almost everything on a single screen. The current weather and near-term forecast is in the upper right quadrant and slides out to reveal long-term forecasts, a video update and current weather radar map. The actual alarm clock is in the left top quadrant, and it can be set to go off by the user any time. A Traffic link slips in an interactive real-time traffic map. And the core of the front page is an expandable window of headlines.

The rollout version of the app we used carried no advertising, although we noticed room available beneath the news window for a standard mobile banner. The company tells Mobile Marketing Daily that there are ad opportunities in the app, and it can be sold into the individual station-specific apps or accross all 8 markets. The app, which was designed by ABC/Disney’s digital teams, aims to be clean and uncluttered for easy look-ups of news-related essentials throughout the day.

Much like the early days of the Web, multiple legacy media constituencies are battling over who commands local mobile mindshare when it comes to news and services. Most local newspapers have their own mobile sites and app, and many local affiliate news stations were among the first major media companies to see the potential for mobile long before smartphones emerged.

For a number of years an alliance of affiliates have been trying to power local digital TV broadcasting directly to handsets, but that effort has been very late in coming. Meanwhile, digital incumbents like Google, directories, and apps like Yelp, where and Foursquare have tried to engage the local ad markets in many different ways.

According to a recent projection from BIA Kelsey, 15% of local ad spending will go to mobile platforms in the next four years. Key categories in local ad spend -- especially on TV, such as auto and retail -- will be among the most aggressive in moving their budgets into mobile opportunities, the research firm says.