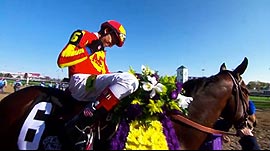 The major thoroughbred horse race that caps the season, the Breeders’ Cup, is celebrating its 29th year with a new Web site and an ad campaign to boost awareness. The campaign, unveiled this week, uses as a soundtrack a major staple of Sinatra-like croondom, “The Best Is Yet to Come.” In the spot, the song is performed by jazzer Kurt Elling. The Breeders' Cup is also planning to have the song performed live at the event, but the performer has yet to be named.

Pete Rotondo, VP of media and entertainment for the New York-based Breeders Cup, tells Marketing Daily that this year "is very different; we went all in on a multi-platform branding campaign." He said the last change was in 2007. "But it was not this kind of full-blown, integrated campaign. We are using it over so many outlets."

He adds that advertising for the 15-race, two-day series had been focused on horses along the stretch and at the finish. But that new campaign is more about the race as an event. Also, he notes, the Breeders' Classic will be on prime time for the first time ever. "We are looking at it as the fourth major, after the Triple Crown."

The campaign, via Conover Tuttle Pace, the Breeders' Cup AOR since 2006, is out of the gate with online and email advertising, with other elements -- including traditional media -- getting added to the mix in the Southern California market leading up to the event. The new www.BreedersCup.com has a new ticket purchase process where you can choose your seats based on photos from all seating areas. There is also an online customer service chat tool.

The race, at the Santa Anita Park in Arcadia, Calif., marks the end of the thoroughbred-racing season, but it has a lot of influence over final honors for horse of the year. The two-day race, starting Nov. 2, will be carried by NBC and the NBC Sports Network. That coverage represents the first year of a multi-year media rights partnership for the network. The organizers say nine and a half hours of Breeders' Cup coverage includes the first-ever running of the $5 million Breeders’ Cup Classic in prime time on Nov. 3. NBC had, per a release, covered the race from its inception in 1984 through 2005.

The 60-second TV spot shows snippets of horses, riders, the race itself and the racetrack high life, with actors, celebrities, and notables who are ebullient about the event. Testimonials by the likes of actor Kurt Russell are thrown in for good measure.

Total purses for the event this year are more than $25 million, per the Breeders’ Cup.