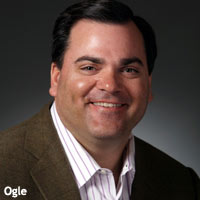 Dallas-based Blue Calypso provides a loyalty and rewards platform that marketers can use to generate word of mouth about products or services. Through the platform, advertisers run display campaigns on Calyp.com or Calyp mobile apps for the iPhone and Android devices that customers use to endorse brands and distribute their campaigns through text messages or social media posts. In return, consumers earn rewards including cash, gifts, discounts and VIP perks.

Motorola Mobility tapped Blue Calypso in December to help promote its then-new smartphones Photon and Bionic as well as the Xoom tablet. Ogle, who joins the company on the heels of Google closing its acquisition of Motorola in May, said he was impressed with Blue Calypso’s technology and ready to switch gears to lead a startup.

“I’ve always worked at these huge multinationals,” said Ogle, whose background also includes stints as CMO at Samsung Telecommunications America, and earlier, at Pizza Hut. “But I’ve always wanted to be an entrepreneur and try something like this. This is the perfect opportunity, because it’s something I know very well, which is social media.”

During his three years at Motorola, Ogle helped lead the launch of the successful Droid line of Android-based smartphones that in turn helped revive the company’s fortunes in the market for sophisticated handsets. However, Motorola’s Xoom tablet, launched in early 2011, has failed to make a dent in the iPad’s dominance.

In his new job, Ogle said one of his initial tasks is simply to make Blue Calypso’s offering better known. “The most important thing is to get the idea out there,” he said. "One of my goals is to help get it over the deadline and really start to spread it.”

Blue Calypso, formerly JJ&R Ventures, gained a somewhat higher profile when it went public last September through a reverse merger and now trades on the over-the-counter bulletin board as BCYP. In a June 4 filing with the SEC, the company reported four board members -- Paul Jarvie, James Rose, Richard Fennessy and Andrew Kerner -- had resigned as of May 31. Two new directors -- Ian Wolfman and Charles Thomas -- were appointed as of the same date.