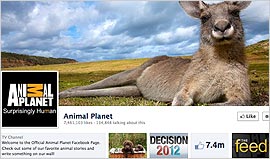 Discovery Communications, the parent company of Discovery Channel, Animal Planet, TLC and scores of other entertainment properties, has 100 separate Facebook pages and almost 40 Twitter accounts, along with a presence on other social platforms like Google+ and Pinterest.

In keeping with its focus on social media, the cable giant has released research underscoring the importance of keying on “influencers” to drive social marketing efforts.

According to the study, the “universe” of social influencers begins with the four in 10 who say they “like” content on Facebook to let their friends and family know about products and services.

The findings, based on a March survey of 400 casua-to-frequent Discovery viewers who have opted to preview programming, notes that nearly eight in 10 of Facebook and Twitter users “like” or “follow” a brand, but a smaller subset (28%) are fans of more than 20 brands.

“These active socials are providing their brand opinions on an ongoing basis, building up an expectation among their communities that they are ‘in the know’ — whether they have positive or negative impressions,” reads the study. For that reason, this vocal group of users is the one marketers should focus on persuading in traditional and social campaigns.

Asked about how they’ve interacted with brands they follow on Facebook or Twitter, more than half (54%) have entered a contest, 42% have answered polls, 36% have commented on a posting made by the brand, 32% have shared a brand posting, and 26% have posted on a brand’s page or feed in the last month.

“Brands that want to influence the influencer, can design programs that target the active ‘likers’ as a starting point, but realistically need to dig deeper to find those with affinity for the brand,” stated a Discovery blog post about the study.

Discovery’s own embrace of social media is partly driven by the behavior of its viewers. The report says they are 2.5 times more likely than average to have visited company pages on social properties and twice as likely to be asked for advice about new products and services.

Overall, 31% use social networking services on cell phones, 28% have a Twitter profile they visit at least every two weeks, 27% contribute to a blog, 22% say people ask them their opinion on potential purchases, and 19% have visited brands’ fan pages.