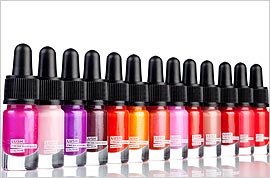 Who needs Prozac? LUSH Cosmetics is introducing its first color cosmetic line next month, and instead of linking them to seasonal trends, is marketing them by mood. Called “Emotional Brilliance,” the collection allows women to pick a word, like “Confident” or “Glamorous,” which leads to the day’s color choice.

The concept came from co-founder Rowena Bird, who always wondered why she was drawn to some color lipsticks on one day, but not another. So the London-based company, best known for its over-the-top bath bombs and environmentally clever products, hired a “strategic behavioral therapist” to help develop the new line.

“It’s the power of suggestion,” the company says in its release. “If one believes enough in something, there will likely be a change in behavior.”

The new launch includes lip colors, eyeliners and eyeshadows, for a total of 30 emotional colors, all of which are vegan. There are four additional products in the collection, including Charisma and Feeling Younger Skin Tints, plus Eyes Right Mascara and Emotional Brilliance Translucent Powder.

LUSH, now sold in 835 stores in more than 50 countries, says the idea is “less about wearing make-up and more about wearing colors that shape your mood.”

To market the line, LUSH will offer a color game online and in its stores, inviting customers to spin a color wheel and choose the three colors that stand out the most, at that moment in time. Those three chosen colors are then placed in the middle of the wheel in the order they have been picked, which LUSH says may symbolize a woman’s momentary strength, weakness and subconscious need.

LUSH, which doesn’t advertise, says it will rely on PR, social media and word-of-mouth, including special music for Facebook, and dedicated store-window displays, as well as VIP events in 10 cities.