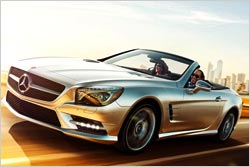 Who will reign in four-wheeled luxury this year? Mercedes-Benz. Or maybe BMW. But Lexus has a leg up as well and so does Cadillac. Well, when it comes to actual sales, Boston-based Kantar Media Compete, with an assist from Autodata, says Mercedes led the premium gang, at least in the first quarter.

But wait. Compete's study says that while Mercedes-Benz had the edge in sales, BMW had considerably more shoppers meandering through its showrooms. The firm says that in Q1 BMW not only led the luxury market in that metric, but also increased its shopper lead over competitors. BMW’s shopper volume increased 36% from January – while its closest rival, Cadillac, fell by 3% over the same time period. In March, BMW got 159,000 shoppers, per Compete. For comparison, Ford led the entire automotive market in March with 638,000 shoppers, per Compete.

So, sales not withstanding, Mercedes-Benz and Lexus shopper volumes were still considerably lower than BMW’s over the same time period. And, Lexus shopper volume remained below Cadillac’s each month, though it sold an average of 6,000 more total units per month. Compete says Cadillac’s high and stable level of demand is a positive for the brand, as it provides a competitive baseline prior to the launches of the upcoming ATS and XTS. In other words, shoppers are there, but the vehicles they want -- a luxury car under the CTS and above it -- aren't. Yet.

Obviously Mercedes does a much better job of converting to purchase the shoppers it gets. That isn't surprising given the focus the brand has put on the retail experience in recent years, with a major upgrade strategy around digital media at showrooms -- tablets for sales staff and big-screen assets. Yes, Mercedes-Benz shopper volume was below BMW’s, but based on average monthly conversion in the first quarter, it had a 20.5% conversion rate, which leads the segment.

Lincoln leads in an area automakers don't really want to talk about, incentives. Lincoln led in the first quarter with a $5,104 average per-vehicle spiff, according to Autodata. Infiniti followed with Cadillac in third. BMW, Mercedes-Benz, Acura and Lexus were the next four. And Audi enjoyed the lowest incentive levels for the quarter, at $2,936. If incentives are low, and sales are comparatively low as well, the issue isn't demand. Scott Keogh, Audi's VP marketing has said the company could use all the cars it can get in the U.S. market. Lexus also had strong conversion despite having the second-lowest incentives-per-sale rankings in the market.

The big picture: luxury sales have increased significantly for the first three months of the year, led by BMW, Mercedes-Benz, and Lexus, notes Compete. "The increase in BMW sales was largely driven by luxury market-best demand, Mercedes-Benz from luxury market-best conversion, and Lexus by a healthy performance of both." The firm says coming months will depend on a few factors: current launches like Lexus GS, BMW 3-Series, Mercedes GL and Caddie ATS and ATX; Lexus maintaining demand; Infiniti; Cadillac's expanding portfolio; if Cadillac and Lincoln incentives will move the market or sit on the hoods like ornaments.