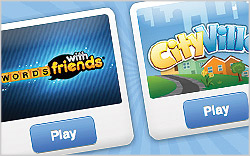 When reports emerged last Friday that Facebook had begun running ads on Zynga’s Web site, it instantly touched off speculation that the social network was planning to launch its own ad network to compete with Google’s AdSense.

For the record, Facebook issued a statement Friday acknowledging the ads running on Zynga’s site, but saying “it will not be showing ads on other sites at this time.” Given the pressure the company is now facing from Wall Street to deliver high revenue growth on a quarterly basis, the expansion of Facebook-powered advertising to other sites integrated with it isn’t hard to imagine.

In a research note today, Pivotal Research senior analyst Brian Wieser said the extension of Facebook ads to Zynga signals the company’s continuing effort to monetize its user base of nearly 1 billion worldwide. The news comes on the heels of Facebook announcing plans to launch a real-time-bid ad exchange allowing marketers to retarget ads to people on Facebook, based on their Web browsing history.

“This initiative will capitalize on the Facebook Connect platform by which Facebook is already integrating with publishers across the Internet, and may further accelerate Facebook’s ability to extend e-commerce/payment initiatives further," wrote Wieser.

The latest step would put Facebook in competition with networks in general -- especially AdSense -- rather than trying to take ad revenue from just premium Web publishers like Yahoo and AOL, he added. Pivotal has already forecast that Facebook will increase its share of the online display and lead-generation market from 14.4% to 16.5% this year.

Wieser is also sticking with his revenue estimates of $4.1 billion and $5.3 billion for Facebook in 2012 and 2013, respectively.

For their part, agency executives are already warming to the idea of a Facebook ad network. “The promise of using FB data to target off the site is intriguing,” said Adam Kasper, EVP, digital investments at Havas Digital. “I’m certain many advertisers would love to try this."

Likewise, Blake Cahill, president of social media agency Banyan Branch, said Facebook’s wealth of social data for targeting ads could give it an advantage over other ad networks. “Advertisers would have improved targeting gleaned from Facebook user data than what existing advertising networks provide when selling online inventory,” he said.

Still, the use of member data beyond Facebook is likely to raise further privacy questions for a company with a history of overstepping its boundaries in that regard (see latest example here), as many things data and Facebook-related tend to do,” said Kasper. “What level of data will FB allow to be used here? That will likely define how it works and ultimately how successful the effort is.”

While Facebook has been tight-lipped about its plans, a company spokesperson told the L.A. Times on Friday it hasn’t shared any information about people or advertisers with Zynga, and that advertisers don’t have access to targeting criteria.

That Facebook would begin testing such a venture with Zynga isn’t surprising, given the long symbiotic relationship of the two companies. Facebook’s share of virtual sales through Zynga games like "FarmVille" and "CityVille" accounted for 12% of the social network’s $3.7 billion in 2011 revenue.