FCC: Bandwidth Relief Not In Sight 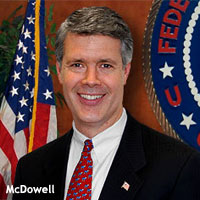 Don’t expect mobile bandwidth to get much better in the next 10 years. That was the bottom-line message from U.S. Federal Communications Commissioner Robert McDowell during a talk at the Interactive Advertising Bureau’s Mobile Marketplace on Monday.

“I don’t anticipate any major chunks of spectrum getting into the hands of consumers for the better part of a decade,” said McDowell, in an on-stage interview with Kevin Conroy, president of Univision Interactive Media.

Earlier this year, Congress passed legislation to set aside a chunk of unlicensed spectrum for wireless broadband by auctioning off broadcast spectrum. It would allow the FCC to conduct “incentive” auctions, which would give TV stations that voluntarily gave up spectrum a piece of the auction proceeds. TV station group owners have opposed the measure as unlawful and contrary to the public interest.

The initiative, which would free up an estimated 80 megahertz for mobile broadband, would provide a framework that would allow two or more TV stations to share a single 6-MHz channel. But McDowell questioned the willingness of stations to go along with that plan. “I’m a little less optimistic we'll actually see results like that," he said.

He also emphasized the complexity of the TV spectrum would make the process even more difficult than usual, comparing it to “three-level chess.” In the first phase, a “reverse auction"--in which multiple stations will compete to sell spectrum to the FCC -- those that want to turn over some or all of their spectrum can seek the price they want, but without any guarantee they'll get it.

If two or more stations in a market offer to sell spectrum, the FCC would be able to choose the lowest price. Then, in a regular “forward auction,” the FCC will resell the frequencies to wireless operators bidding for airwaves.

How will everyone in the mobile ecosystem from consumers to carriers meet the rapidly growing demand for bandwidth? “If you’re an app designer, I would suggest you design your apps as efficiently as possible,” quipped McDowell to underscore the need for greater “spectral efficiency” industrywide. He said companies that can come up with new algorithms, improved hardware or other innovations to cope with broadband scarcity stand to reap gains.

The FCC commissioner also said the federal government has to do its part to ease the bandwidth squeeze by giving up spectrum itself. McDowell, a Republican, indicated that an executive order by President Obama could force executive branch agencies to relinquish needed spectrum.

Asked by IAB President and CEO Randall Rothenberg about the impact of the bandwidth crunch on mobile data pricing, McDowell suggested the situation did not call for new regulation. The U.S. major carriers have abandoned unlimited data plans in favor of tiered-pricing, based on usage or throttling of heavy data users, prompting criticism and legal challenges.

“The more you use a product, the more you pay,” said McDowell. “I would be very concerned if the government were to step in to try to prohibit that, because I think it’s going to make worse the experience for everybody.”