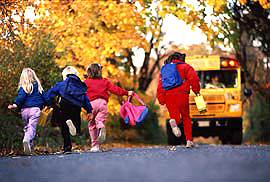 Remember last summer, when moms were abuzz with how they were skimping on back-to-school shopping, and making that grimy backpack take one more trip around the sun? Forget about it. The National Retail Federation is predicting big back-to-school spending in the months ahead, with the average person with school-age kids forking over $688.62, up from $603.63 last year. And dads will spend even more: Men are expected to spend an average $739.75 on their children in grades K-12, compared to women who will spend an average of $640.42.

For parents of the K through 12 set, the biggest increase is spending on consumer electronics, with 59.6% saying they intend to buy some sort of electronic device -- a big jump from the 51.9% percent who planned to do so last year. The survey, conducted by BIGResearch for the NRF, included 8,500 adults, and found that parents think they will spend $246.10, on average, for clothes, and $217.88 on electronics. Another $129.20 will go to shoes, with an average of $95.44 on school supplies, including backpacks.

And despite a sharp increase in spending for college kids, economic concerns are still having a big impact. While college students and their families expect to shell out a total of $907.22, up from $808.71 last year, 83.5% of the back-to-college shoppers in the survey say the weaker economy is overshadowing their spending plans. Older kids are compensating by comparison shopping online (34.6% vs. 30.7%) and shopping online more often (20.5% vs. 18.8% last year.) More parents say they intend to ask college kids to make do with last year’s items (31.2% vs. 29.7% last year).

In a separate survey, the International Council of Shopping Centers is also predicting an A+ increase. It forecasts that increases in the back-to-school season -- which generally runs from mid-July to mid-September -- to be 5.4%, potentially the strongest gains since 2005, when they rose 6.4%.