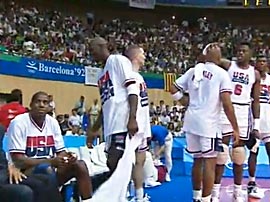 This is the 20th anniversary of the "Dream Team," and the big 2012 USA Basketball brand roster is both huge and retrospective. The National Basketball Association says the 2012 Olympic USA Basketball has the biggest-ever portfolio of partners. In addition to American Express, Cisco, Gatorade, Las Vegas Events, the Milk Processor's Board, Nike, State Farm, and Tiffany & Co., the team got newcomers Jeep, Burger King, Dr. Pepper, Snapple Group, MetroPCS, 24 Hour Fitness, and Right Guard.

Several of the team's sponsors are using the 20th anniversary of the Michael Jordan-helped team as a soapbox for their narrative: special retail promotions, broadcast features, and grassroots tours are calling out the 1992 lineup. Involved in the assortment of campaigns are 11 former USA Basketball players, including partners Carmelo Anthony, Chris Paul, Deron Williams, and Chauncey Billups.

Team 2012 player tie-ins include Deron Williams partnering with MetroPCS brand advertising and promotions for Samsung Mobile, plus appearances and social media; Carmelo Anthony's support of the “Got Milk?” campaign "My After," which has Anthony appearing in national print and television ads and eight vignettes on Milk’s Web site; and Jeep brand's spotlight on Chris Paul as its spokesman for its partnership with USA Basketball in brand ads and video vignettes about the Jeep/Team USA partnership.

But which team over the past twenty years has been a marketing dream? Nielsen ran the numbers using its E-Poll’s N-Score rating, which measures endorsement potential.

The marketing firm found -- no surprise -- that the 1992 Dream Team, with Michael Jordan, beat every other team and far out-charms the current court counterparts by greater than a factor of four.

But per Nielsen, Americans view this year's team Americans as 50% more "exciting" than the 1992 team. Still, 17% consider the 1992 Dream Team as being “down to earth,” while only 10% of respondents think the current Dream Team is. The poll finds that this year's team has two highly “Influential” players in both Kevin Durant and LeBron James. The Original Dream Team featured the likes of Michael Jordan and David Robinson as the most “Influential.”

Those marketing to women might note that females think that Chris Paul is the most handsome player on the 2012 roster, while Center David Robinson was considered the most handsome on the ’92 team. The 2012 team is viewed by females as more handsome overall versus the Dream Team.