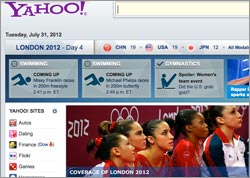 Yahoo is making a bid to be a pacesetter in media companies’ burgeoning emphasis on developing second-screen experiences, where TV viewing content is synced in real-time with what’s available on a tablet or other device. The company is referring to its renewed effort as IntoNow 3.O, which will have a focus on social media and music.

Driving Yahoo’s efforts and its competitors in the space is simple consumer behavior. The company says 80% of TV watchers do so with a mobile device or tablet in hand. The IntoNow free app works with the iPhone, iPad and iPod touch.

“iOS devices are pervasive in our living rooms, and second-screen behavior is now commonplace,” stated Adam Cahan, who founded IntoNow, which Yahoo acquired.

Yahoo said the 3.0 version will offer a TV-music sync, where the system can identify music played during a broadcast and direct viewers to make a swift purchase via iTunes or an opportunity to watch a music video on YouTube.

In social media, a function tapped “CapIt” allows a viewer to tap a button on the app and send a photo of a scene -- sudden evidence of an unexpected relationship on “Grey’s Anatomy” or CNN breaking news, for example -- replete with a personally added caption to a friend via Facebook, Twitter or an IntoNow capability.

Plus, IntoNow will offer a staple of second-screen opportunities with the chance to conduct conversations with friends privately or all-comers about content.

IntoNow’s system is propelled by a patented SoundPrint technology that can identify TV content seen live or in archived TV. Some 160 networks are being catalogued.