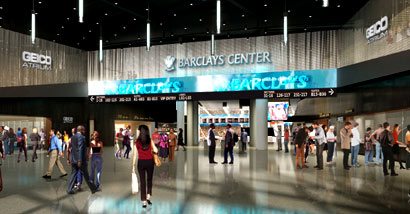 Barclays Center is a massive sports and entertainment structure in downtown Brooklyn, hunkered like a rusty-shelled box turtle between Flatbush and Atlantic avenues, across the street from the visually challenging Atlantic Center Mall (from the same developer.) The venue, approaching completion, has lined up a major sponsorship roster as it lumbers toward its opening day next month.

The Forest City Ratner development project has secured its ninth sponsor to help fund the sportive ambitions of Brooklyn Nets NBA team that will make the venue its home. Auto Insurer GEICO has signed on for top-shelf brand activation including naming rights to an atrium inside the main entrance. The company will get signage around the venue plus television-visible branding on each side of the basketball hoop stanchions for each Nets home game.

Forest City says GEICO will also get branding on the basketball hoop stanchions as part of the arena’s college basketball platform, Brooklyn Hoops. This coming year Barclays Center is set to host the NCAA Champion Kentucky vs. Maryland and Michigan vs. West Virginia, among a raft of other games.

The venue -- which has 18,200 seats for basketball, around 19,000 seats for concerts, 100 or so luxury suites, four bars, three clubs, and a restaurant -- has also signed as founding partners American Express, Calvin Klein, Cushman & Wakefield, EmblemHealth, Foxwoods Resort Casino, MetroPCS, Stolichnaya, and Ticketmaster. Other sponsors include Adidas (which will have a store selling Nets regalia), Anheuser-Busch, Coca-Cola, Haier America, Sony and New York Marriott at the Brooklyn Bridge. Barclays has its name on the hood, of course, though if company gets further sucked into the Libor scandal vortex, that might change.

The arena will open on Sept. 28 with a concert by Jay-Z, who will no doubt alter the stylings of his "New York, New York" song to fit the borough. Also to signed on are a strategic roster of acts designed to lure every possible demographic: Barbra Streisand, Andrea Bocelli, Journey, Leonard Cohen, The Who, Justin Bieber. gospel acts Kirk Franklin, Marvin Sapp, Donnie McClurkin, and Israel Houghton, Ringling Bros. and Barnum & Bailey Circus and Disney on Ice, Kellogg’s Tour of Gymnastics Champions, and the New York Masters equestrian show jumping.