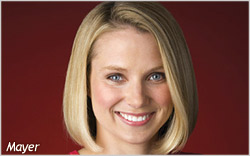 Yahoo CEO Marissa Mayer will receive an annual base salary of $1 million, subject to annual renewal, and an annual bonus under Yahoo's Executive Incentive Plan with a target amount of 200% of base salary, according to a recent 10-Q filing with the United States Securities and Exchange Commission (SEC).

That bonus will require Mayer to dig into her engineering expertise and Google background, especially if she plans to revive Yahoo's search ad business. Doug Ammuth, analyst at J.P. Morgan, agrees that a refocus on search and communications will require some investments, but also an increase push in engineering to compete with Google and Facebook. The company faces advertisers looking for ways to sort and drive more data through technology to make better ad-buying decisions. "Ms. Mayer is examining a renewed focus on Yahoo!'s search business," he wrote in a research note.

In the July 20 SearchBlog, "Will Yahoo Turn to Google if Microsoft Search Alliance Fails?" I speculated about what Yahoo might do if the alliance with Microsoft fails to produce the search revenue per share. Expect Yahoo to announce its plans and search strategy by the end of this year -- likely sooner than later.

On Thursday, Yahoo said Mayer is reconsidering a plan to pay shareholders billions of dollars from an anticipated windfall later this year, as part of an attempt to get the company on the correct track, according to Bloomberg Businessweek.

No doubt Mayer will earn her keep. An 8-K SEC filing describes Mayer's intent to review with the Board of Directors the company's growth and acquisition strategy, the restructuring plan that began in Q2 2012, and the company's cash position and planned capital allocation strategy. This review process may lead the company to reevaluate the process and plan.