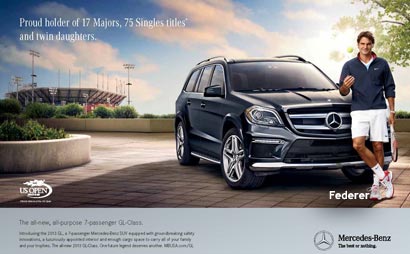 How many Rogers are there? Well, there's Roger Federer the tennis great, Roger Federer the celebrity, Roger the fan machine...and Roger the parent of twin girls. All of them are on display in a new Mercedes-Benz USA (MBUSA) campaign timed with the automaker's top-shelf sponsorship of the U.S. Open in Flushing, Queens, and the rollout of the 2013 GL-Class full-size luxury SUV.

The TV ad, in which Federer is shown in his professional and personal roles, first appears Aug. 16 on Roger Federer's Facebook page (www.Facebook.com/federer), then at MBUSA.com/Mercedes/Index, before hitting the airwaves during US Open coverage on CBS on Aug. 27. But the company has been leveraging the relationship for months both on Facebook.com/MercedesBenzUSA and Federer's page.

Back in June, MBUSA ran a program on Federer's page to allow the tennis champ's fans to choose the headline for print ads that will run in The New York Times, USA Today, Tennis Magazine and the official US Open tournament program, with the headline “Proud holder of 16 Majors, 74 Singles titles and twin daughters,” getting the most votes.

The new TV ad shows Federer leaving a stadium, signing autographs, getting admiring glances from fans, jumping into his GL and joking with his kids. The spot, and another one that is focused entirely on the vehicle, will air for the duration of the Open on CBS, ESPN2 and the Tennis Channel. Federer's and MBUSA's Facebook pages will host other product videos, including one in which he does a walk-around of the GL-Class, explaining its virtues.

Federer first appeared in Mercedes-Benz ad -- for the CLS sedan -- at this time last year. Bernie Glaser, MBUSA's VP of marketing, says the company first experimented with allowing fans to choose ad headlines for that campaign. He tells Marketing Daily that it was such a draw the company decided to bring it back. "This year we got something like 114,600 people engaging in the contest and over 100,000 'likes.'"

He says the idea is to build suspense leading up to the spot. The automaker, for example, ran a "making of" video about the forthcoming TV spot around this year's Wimbledon (which Federer won.) After posting the behind-the-scenes content on June 28 on Federer's Facebook page, and then on MBUSA's Facebook page, MBUSA measured 120,000 people engaging in the content and garnered 98,000 fans, per Glaser. Similarly, the actual spot will live on Federer's Facebook page today (Thursday), on MBUSA on the 19th, and on TV by the start of US Open.

The demographics for GL-Class are heavily family-centric and comparatively young, per Glaser, who says 62% of owners have children. Ninety-one percent are married, the median age is 48, and household income is around $292,000 per year. "[Federer] is a great fit for us," he says. "He's the best in his field, he's a legend, and he strives to be the best. And he drives a GL in real life."

At the U.S. Open, with which MBUSA began a four-year sponsorship in 2010, the company will have a raft of experiential activations, plus a presence on USOpen.org

The company is also running a separate social-media extension, “Best Summer,” in which fans can upload photos about how they spent the summer to try and win a 13 month lease of an SLK250 Roadster. As part of that, the company will give away two sets of box tickets via the MBUSA Facebook page to a national contest winner for the finals weekend, including airfare, hotel and ground transportation; and four box tickets will be given to NY metro-area fans as well.

Mercedes-Benz has big sponsorship programs in other sports, including golf -- the PGA Tour, the Riders Cup and Masters -- and football. In fact the biggest and timeliest sports deal for MBUSA is going to be the NFL, because the automaker essentially owns the New Orleans Superdome -- now called the Mercedes-Benz Superdome -- from a brand identity perspective, and that's where next year's Super Bowl will be played. "The entire stadium inside is heavily covered with M-B logos and branding," says Glaser, adding that in addition to big Mercedes-Benz Superdome signage on the stadium, the three-pointed MB star is both inside and outside the Superdome's roof structure.