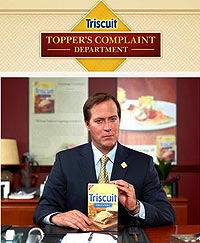 Kraft Foods’ Triscuit is looking to drive greater use of the crackers for simple, everyday snacking (as opposed to use with toppings) with a humorous new campaign -- the first with the brand’s new agency of record, Crispin Porter + Bogusky.

Triscuit is the most “topped” cracker in its category, according to Kraft. The no-toppings-needed messaging also aims to support the brand’s growing number of varieties -- 11 varieties of original, square Triscuits (the newest being dill, sea salt and olive oil), and four varieties of Triscuit Thin Crisps (smaller, crispier, triangular crackers).

The premise of the “Toppers’ Tantrum” campaign is that Triscuit is apologizing to its “angry satisfied” customers for having stressed topping suggestions for the crackers in its marketing over many years -- neglecting to point out that the crackers are delicious snacks sans toppings. Now, the brand wants to make amends by offering U.S. consumers who post “Topper Tantrums” on the brand’s Facebook page a free box of Triscuits. (The free-box offer is good through Sept. 9; consumers can reach the Facebook page either through www.ToppersTantrum.com or www.facebook.com/triscuit).

National TV spots (with 30- and 15-second versions) show an actor playing a Triscuit executive watching as “angry satisfied” Triscuit lovers (including a young father and a female teenager) storm into Triscuit’s “headquarters” to throw tantrums about just having discovered that “untopped Triscuits taste great.”

He then apologizes for customers having been “robbed” of the pleasures of untopped Triscuits due to the brand’s traditional stress on toppings. “If you, too, have come to this frustratingly pleasant realization, register your complaints online for a free box,” he offers.

Triscuit is employing print ads with the same creative theme (also driving readers to the Facebook offer) in national weekly and monthly magazines including People, Star, Entertainment Weekly and Every Day With Rachael Ray, according to Triscuit Senior Brand Manager Jimmy Wu.

“This creative is a definite departure for Triscuit,” Wu tells Marketing Daily. “The idea is to use tongue-in-cheek humor to break through the [advertising] clutter, contemporize the brand and convey that Triscuit is great for simple, everyday snacking, not just ‘formal’ snacking.”

“A campaign featuring unhappy customers is bold and unorthodox, but it allows us to talk about Triscuit’s great taste -- something that’s literally been covered up in the brand’s image for decades,” adds Tony Calcao, EVP/executive creative director at CP+B, which also handles Kraft’s Mac & Cheese and Jell-O brands.

The TV and print ads will run through September.

During 2010-11, Triscuit’s marketing was focused on a mostly online campaign tied into the home-farming movement.