Nissan's Pathfinder: Something To Laugh About 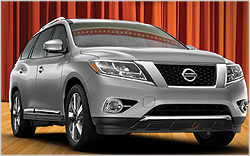 It's a tenet of improvisational comedy that participants should to be ready to say "yes" to just about any suggestion. Including one from Nissan that they do a 12-hour, essentially real-time improvisation about a new SUV, with an online audience offering ideas for the troupe to riff on.

For the 2013 version of the Pathfinder, which rolls into dealerships this fall, Nissan will have the famed Chicago-based Second City spend a full day creating ad hoc music videos about the crossover. The 12-hour “Improv-tastic Road Trip,” starting at 8 a.m. on Aug. 20, involves the performers taking online suggestions, then immediately writing and performing personalized videos as fast as they can turn them around. In addition to going to the person who inspired the idea, the videos will also be on Nissan's new Pathfinder tab on Facebook and YouTube channel.

And submitting suggestions enters participants for a chance to win one of two trips for two to see The Second City in Chicago or Toronto.

Erich Marx, who does Nissan's digital media, tells Marketing Daily that the program came from one of Nissan's agencies, Chicago-based social media firm Zócalo Group, which has done work on the Nissan Leaf as well. "They connected with Second City." He says the initial idea had been to do something scripted, but that when Nissan and Zócalo met with Second City and had them do on-the-spot improvs with the Pathfinder after a walk-around of the vehicle, "we were in tears, cracking up watching their song improvs. We talked about how we could capture what they were doing."

He says the troupe came back a few days later with the idea: they would do 50 or 60 songs made up on the spot with crowdsourced ideas. "They said: 'Give us a favorite color, city, and feature of new Pathfinder and we will write, record and video improv songs on the spot using those suggestions.'"

Marx says the effort involves eight actors working in shifts all day. He says it may start slow in terms of consumer engagement -- but that social media being what it is, it should have a big audience by hour three. "We are promoting it; so is Second City, but it's really a big experiment for both of us; Second City has never done anything like it. If they can capture even half of the comedy we saw live, we think it will catch on."

Marx will be in New York in mid-September because the automaker and its agency of record, Los Angeles-based TBWA/Chiat Day, are up for several Digiday Sammy social media awards. The company is nominated for a crowdsourcing campaign supporting the Nissan 370Z. Nissan asked fans to make modification suggestions for the 370Z, and then built a version of the car based on the suggestions. The team is a finalist in “Best Social Creative,” “Best Branded Social Community” and “Best Facebook Branding Campaign.”