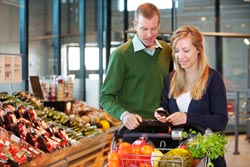 A new study from the Hartman Group finds that there are major changes afoot in the way Americans forage for food, including frequency, channels and the way they define value.

“The idea of a stock-up trip has really changed,” Laurie Demeritt, president of the Hartman Group, a Bellevue, Wash.-based research company, tells Marketing Daily. “What was once something they did every seven to ten days, they now do every three to four to five days. So instead of a linear path to purchase, it is more like a constant circle.”

One reason is financial perception. “The economy has exacerbated this trend,” she says, “and laying down less money per trip makes them feel they are saving money overall.”

Another surprise from the research, which included a quantitative sample of 1,900 adults, as well auto-ethnographies, which asked consumers to record their shopping excursions over five- to ten-day periods, is that, despite massive efforts from discounters and grocery chains to be all things to all shoppers, it isn’t working: 51% of people visit two or more stores every time they shop, she says. And grocery chains still rule, with 92% of the sample saying they visited a grocery store within the last month.

Also clear, she says, is that they are redefining what value means to them. “Lack of waste is a big part of what value means, so we see this a lot in club channels. Consumers are asking, 'But will I really use it?’ They are also paying closer attention to experience and quality. They are paying a little more, for example, for more upscale private labels.” As a result, she says, there is no one value channel.

The study also uncovered substantial opportunities in catering to male food shoppers, with men shopping as frequently as women in all channels. Overall, 47% of primary shoppers are male. And among Hispanics; that rises to 57%.