Can Marketing Save The Maine Lobster? 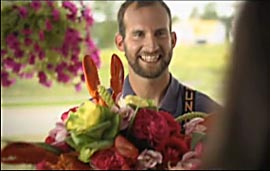 It’s been a heavenly summer for lobster lovers in Maine: A warm winter, better conservation efforts and the month-early arrival of the soft-shell season has spawned an almost unprecedented supply of the sweet and sumptuous crustaceans. But it’s also created economic hell for the lobster industry, which has seen prices fall to as little as $1.50 per pound, the lowest in decades, compared with about $4 at this time last year.

Regional promotion efforts are in full swing. The Maine Lobster Council, which represents some 4,500 local lobster fishermen, is running a TV spot which shows a man presenting a woman with a bouquet of lobsters, and using them to make hearts in the sand. The governor of Maine has declared August Lobster Month, and there are plans to extend the promotion into fall.  And in an effort to “turn lobsters into Lobsteraid,” a group of local inns have even launched a first-ever Lobsterpalooza, a weeklong festival in some of Maine’s prettiest fishing villages.

But the glut raises serious concerns, and in the most recent development, the state’s Lobster Advisory Council, made up primarily of lobstermen working with a food industry consultant, voted unanimously to move forward with a proposal for a $3 million marketing effort. Currently, the promotional budget for Maine lobsters, sometimes called “bugs,” is $400,000.

The next step, Patrice McCarron, executive director of the Maine Lobstermen’s Association, tells Marketing Daily, is to move the proposal before the state legislature. “It is all very much still a work in progress,” she says, “which would be funded by the lobstermen.”

And lobster families are being pounded not just by lower prices, but also by higher costs for boat fuel. “It’s tricky,” she says. “They’ve made less money so it is difficult to invest in the future. But business is marginal, and people are worried about the medium and longer-term. People want to have a profitable fishing industry. And lobstermen are very concerned about what kind of industry they may be able to pass on to their children.”

The issue has continued to generate interest, especially after Canadian lobsterman blockaded Maine lobsters. (A deal has now been reached, but besides economics, there’s historically bad blood, with each side proclaiming their lobsters taste better. The Maine Lobster Council is currently touting a blind taste test from the Wall Street Journal, in which the Maine Lobster trounced lobster from Nova Scotia’s Fourchu.)

“I think there will be quite a bit of support for the campaign, but it will not be easy,” McCarron says. Historically, though, she points out that locals have rallied ’round the lobster community in tough times. For example, when financial markets crashed back in October 2008, which resulted both in disruptions in the supply change and a decrease in consumer demand, people banded together to support  “a somewhat under-the-radar effort to eat lobster for Thanksgiving,” she says.

But no one is expecting anything to improve quickly, and lobster prices are predicted to remain low through the year, which means the Maine Lobster brand will have to struggle to keep its high-end cache even at hot-dog like prices. If approved, McCarron says the campaign wouldn’t likely begin until 2014.