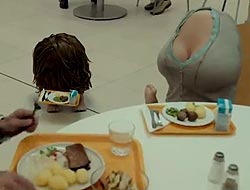 Axe recently launched its "Susan Glenn" campaign featuring Kiefer Sutherland and the idealized woman he wished he had spoken to. The Unilever brand has a new campaign that spotlights a different stylized view of men and women.

The ads detail a love story between a man and woman who see each other at the office but somehow never connect. The catch -- and the element that manages to dance around the stereotyping issue -- is that each is a ridiculous embodiment of what men and women are theoretically drawn to in each other: the guy is a two-foot-tall walking haircut; the girl is a two-foot-tall walking cleavage.

The campaign, an umbrella effort for all of Axe's 21 or so hair care products, is via BBH New York. It comprises 60-second and 30-second ads whose message asks, what if we are attracted to what we first notice about the opposite sex. For women, it would be hair. The new tagline --“Hair.  It’s what girls see first.” Axe has dealt with hair in other recent campaigns such as one for its anti-dandruff products, wherein a guy's blizzard of dandruff makes women disappear, leaving only their apparel.

If there's something Muppet-like about the diminutive, quirky sex objects, it's because they're Muppets. BBH, eschewing digital effects for real puppets, went to Jim Henson’s Creature Shop to build the characters.

A new study on the body wash and shower products categories from Chicago-based market research firm Mintel says Unilever shampoo brands increased by 10% between 2010 and 2011, it was due in large measure to the acquisition of Alberto-Culver in 2010. Axe, which was not an Alberto Culver brand, increased share in shampoo by 10% as well in that period.

Mintel says, broadly speaking, private label is exerting pressure on the category as consumers are more focused on price. Mintel reports sales of P&G’s products were down almost 2% in the 2010 to 2011 time frame with Pantene posting nearly an  8% decline in the period.

Showing the relative immunity of dandruff products, Head & Shoulders saw an  increase of 6.9% in sales during the period, per Mintel. Where Axe really took off, per the firm, is in the gel and mousse area of hair care, as did sibling brand Suave, because of the affinity of younger men to the former, and price-conscious consumers to the latter brand. Mintel says of products for younger men and value shoppers, "Both  attractive niches in the current economic climate." Sales of Axe mousse and gel products rose 21.6% in the 2010-2011 period, per Mintel.

Axe is also the top-selling body wash brand in the retail market, with sales of $63 million 2011, up 5.7% over the prior year. Unilever expanded the brand in 2012 with the release of Axe Anarchy for men and women.